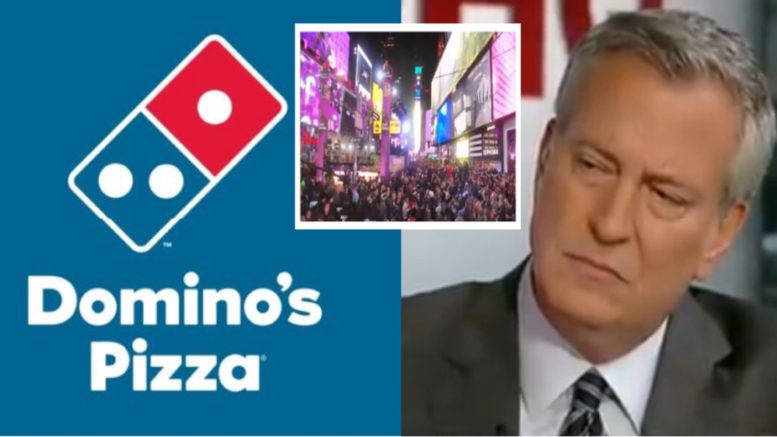 Dominos fired back at Bill de Blasio Thursday after the New York Mayor criticized the pizza chain for raising the price of their pizzas on New Year’s Eve in Times Square.

A delivery man for Manhattan Domino’s was spotted running $30 pies to revelers, and De Blasio claimed the chain was “exploiting” consumers and suggested the visit “local” joints, reported Fox Business.

Bill de Blasio took to Twitter Wednesday to vent his frustration, along with posting a picture of a headline, who wrote about the $30 pizzas.

de Blasio asked: “Jacking up your prices on people trying to celebrate the holidays? Classy, @dominos.”

“To the thousands who came to Times Square last night to ring in 2020, I’m sorry this corporate chain exploited you — stick it to them by patronizing one of our fantastic LOCAL pizzerias,” he suggested.

A Domino’s spokesperson told Fox Business on Thursday, “Every store in [New York City] is owned by a local resident. Every employee is a local New York resident.”

“Those stores provide jobs to thousands of his fellow citizens. With his comments, the mayor is suggesting that New Yorkers who own or work at a franchise are ‘lesser than’ those who don’t,” the Domino’s spokesperson added. (Continued Below)

Jacking up your prices on people trying to celebrate the holidays? Classy, @dominos.

To the thousands who came to Times Square last night to ring in 2020, I’m sorry this corporate chain exploited you — stick it to them by patronizing one of our fantastic LOCAL pizzerias. pic.twitter.com/rO6I9oYIku

Twitter, however, was also quick to respond to de Blasio’s criticism of Dominos:

Silly Billy –
Dominos stores are franchised. You’re literally attacking someone who wanted 2CAPITALIZE on the opportunity & turn a profit.
Consumers can choose 2, or not 2 pay that price.
A cheeseburger at $28 is fine, but a pizza at $30 isn’t? Who are you? The food police?

Delivery people & owners need hazard pay because they are scared of being assaulted by the criminals DeBlasio keeps releasing from prison.

First, $30 is not that far off from what a large pizza costs around Times Square anyway, and the added $ to get it to through the crowds to the person is completely justified. Second, Dominos franchise operations are also owned by hardworking NYers. This is a bad take.

What was he saying? pic.twitter.com/AIa2GulYvT

(Related: Lewandowski Gives de Blasio A Humiliating Farewell Upon Ending His Bid For President: ‘I Never Saw This Coming’)

WATCH: NYPD, FDNY & Thousands of Other NY Workers March Across the Brooklyn Bridge in Protest of City Rules