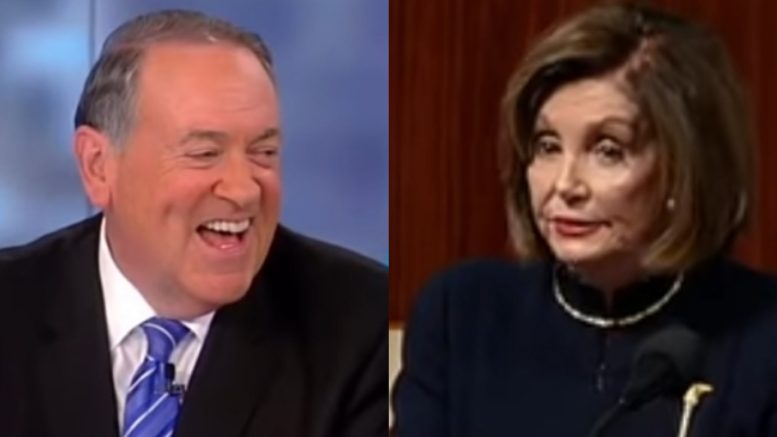 Leading up to Wednesday’s impeachment vote, Democrats quickly sped through the process citing “urgency” as if there was an emergency to hold President Trump accountable.

President Trump was considered by Democrats to be a “clear and present danger” and involved in a “crime spree” leading up to the rushed impeachment vote.

But as soon as Democrats solidified the votes needed to pass two articles of impeachment, they suddenly struck a different tone.

Instead of transmitting the articles of impeachment to the Senate, Speaker Pelosi announced she would be holding them until rules in the Senate are “fair” to her liking, and so that Democrats can determine how many managers to appoint.

Pelosi’s move left many Americans scratching their heads wondering if all if the “urgency” talk prior to the vote was nothing but a bunch of hogwash to speed up the process.

Former Arkansas Governor Mike Huckabee mocked the chain of events involving the “urgency” in Democrats’ “fake impeachment hoax” and he used none other than Pelosi in four different examples to make his point clear. See Below

Pelosi said it's urgent we address climate change and pass New Green Deal. She then bought a beachfront time-share to be paid over 30 years. #FakeImpeachmentHoax

Pelosi smelled food burning in oven and declared she had to get off phone to tend to dinner urgently. But first, she weeded her garden, washed some clothes, and ate a sandwich before getting to the oven. #FakeImpeachmentHoax

Boom! I love @AriFleischer and he exposes the phony "urgency" of the Schiffty House Dems and the "Speedy Speaker." If there's "existential threat" to nation and "clear and present DANGER" of @realDonaldTrump then you don't piddle around. #FakeImpeachment #FakeOutrage https://t.co/uDD9JR5jj2