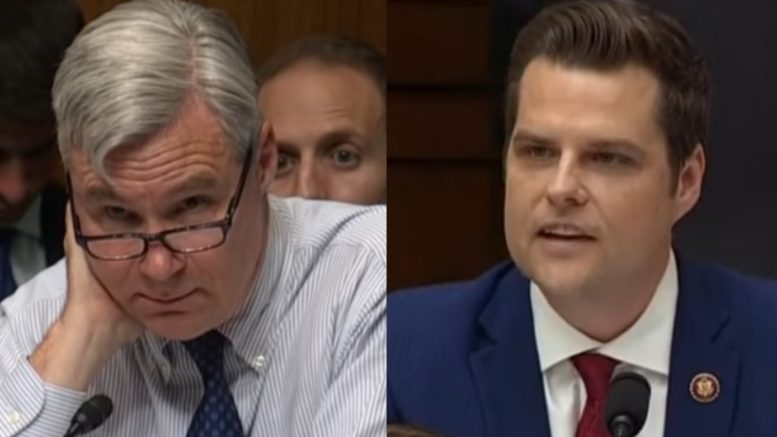 On Saturday, Senator Sheldon Whitehouse (D-RI) responded to House Speaker Nancy Pelosi’s decision to withhold articles of impeachment from the Senate until the rules for trial are agreed upon.

Shelden encouraged Pelosi to continue holding the articles and tweeted four reasons why doing so “is a good idea,” which can be seen below.

1) She can send them over whenever she wants.

3) It puts the focus on Mitch’s mischief to fix the trial by hiding probative evidence.

4) She has a good point: the kind of trial it will be affects what managers she should send. Particularly after Mitch confessed he’d violate his oath of impartiality, its a fair question. Continued Below

“Weird Senator,” Gaetz replied in a tweet. “Eric Swalwell said it was a ‘crime spree in progress’. Jerry Nadler said ‘nothing could be more urgent.”

“Now you admit impeachment was all about agitating President Trump & Republicans,” he added. “You people are sick to put our country through this for petty politics.” Video Below

Weird, Senator.@ericswalwell said it was a “crime spree in progress”@JerryNadler said “nothing could be more urgent”

Now you admit impeachment was all about agitating @realDonaldTrump & Republicans.

You people are sick to put our country through this for petty politics. https://t.co/lfbUImojDi

Rep. Gaetz appeared on Justice With Judge Jeanine on Saturday evening, where he gave his take on how he thinks the Senate will handle the articles once Pelosi finally decides to transmit them.

.@RepMattGaetz of the House Judiciary Committee joined me to discuss the endless barrage of nonsense from the Democrats – take a look: pic.twitter.com/Hp6Yze0qOG