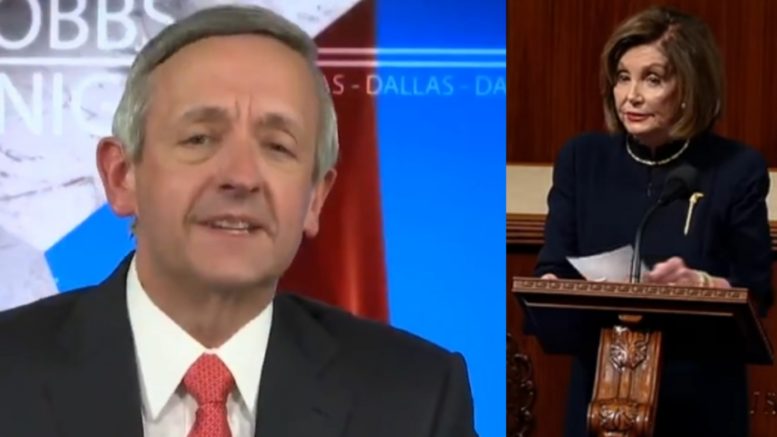 Jeffress has been on a mission of getting 25 million unregistered Evangelical Christians signed up to vote in the 2020 election, and he claims the attempted impeachment of President Trump has energized those efforts. He also believes Democrats “committed political suicide” by voting to impeach Trump, which made it appropriate for them to wear black for the occasion.

Related Article: Pastor Jeffress Exhibits Why Evangelical Christians Are ‘Seething With Anger’ Towards Dems: They’re Attempting To ‘Steal This Presidency’

“[Evangelicals] are energized, they are also enraged that Democrats are trying to impeach their values by illegitimately and stealing the 2020 election,” Jeffress said. “So, I think that these voters are going to be motivated.”

Pastor Jeffress then commented on Nancy Pelosi and other Democrats wearing black to Wednesday’s impeachment vote.

“And I don’t know if you saw this — Nancy Pelosi and her comrades were wearing black to show how serious they were making impeachment. Well, black is what you wear to a funeral, and that’s really appropriate because Nancy Pelosi committed political suicide when she voted to impeach President Trump and she has killed any chance the Democrats have of winning in 2020,” he declared. Video Below

Dobbs then asked Pastor Jeffress what he thought about Pelosi’s strategy of not handing over articles of impeachment to the Senate.

“It’s like the old game of ‘Hot Potato’,” Jeffress said. “They’re all trying to pass the hot potato of what to do.”

“I think she may well be looking for an off ramp, but Lou, I think it’s too late,” he concluded. Video Below

Bloomberg Floats Raising Taxes On The Poor So They Can ‘Live Longer’, Huckabee Responds: “Stunning That He Unflinchingly Said It Publicly”

WATCH: Crowd Breaks Out in ‘We Love Trump!’ Chants at Holyfield vs. Belfort Fight