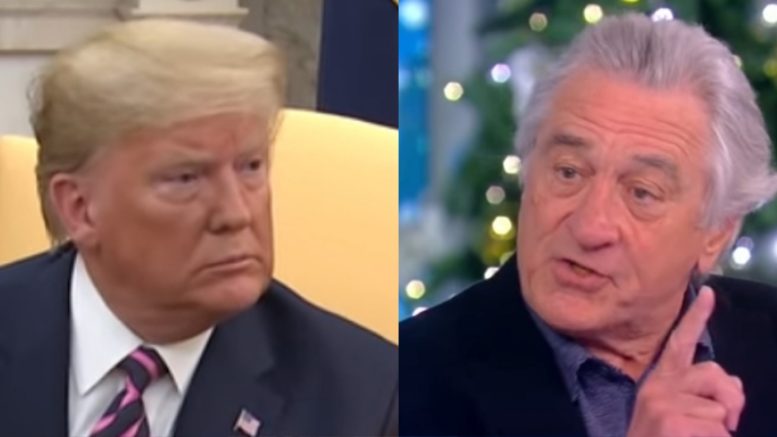 Anti-Trump Holywood actor Robert De Niro continued his nasty attacks on the President while joining Michael Moore for an interview.

De Niro said he believes President Trump “needs to be humiliated” and suggested one way to do this is by someone hitting him in the face with “a bag of s**t” according to Daily Mail.

“I’d like to see a bag of s**t right in his face. Hit him right in the face like that and let the picture go all over the world,” De Niro said during Michael Moore’s podcast said as per the Daily Mail.

“And, that would be the most humiliating thing because he needs to be humiliated,” he reportedly added.

As reported by the Daily Mail: “De Niro said that whichever Democrat gets the presidential nomination to face off with Trump in 2020 has to ‘confront him and put him in his place, because the people have to see that, to see him be humiliated.'”

De Niro’s remarks come after the liberal actor attacked President Trump and his children on The View earlier in the week. Video Below

While appearing on The View on Monday, De Niro said impeachment is a “stain” President Trump “deeply deserves” and he slammed the President’s character before lashing out at his children.

“I don’t want my kids to take this the wrong way, but if my kids did what these kids did, I wouldn’t want to be related to them,” De Niro told hosts of The View.

“I would disown them. I’d have a serious talk with them,” he added. Video Below

Robert De Niro Lashes Out At President Trump & His Children:

Nikki Haley On Qassem Soleimani’s Death: “His Demise Should Be Applauded By All Who Seek Peace And Justice”