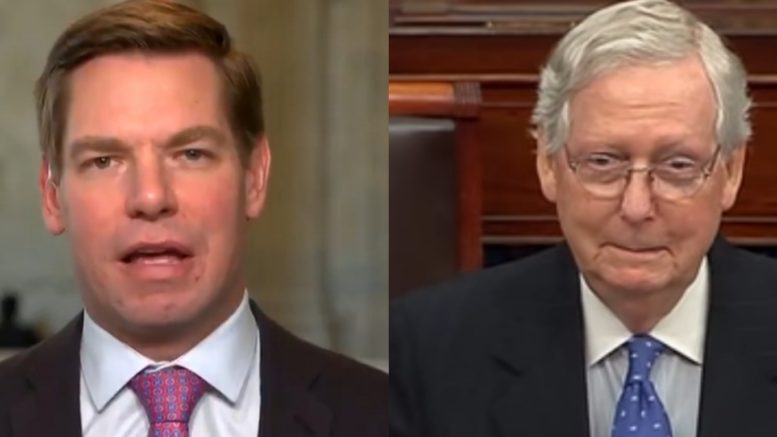 Democrat Congressman Eric Swalwell weighed in on the apparent strategy of House Speaker Nancy Pelosi to hold off on transmitting articles of impeachment to the Senate until a trial is “fair” to her liking.

Pelosi intially brought up the strategy when speaking with reporters soon after the House voted along party lines to impeach President Trump.

Related Article: Grassley On How Long Pelosi Can ‘Sit On’ Articles Of Impeachment: “Legally, Not At All. But Politically, As Long As She Can Get Away With It”

Rep. Swalwell gave his opinion on the situation while appearing for an interview on CNN.

After being pressed on whether he is “comfortable” with an indefinite hold on the Constitutional process of impeachment, Swalwell said, “What we believe is that the speaker and the American people should have assurances that there is going to be a fair trial and that the outcome is not going to be rigged.”

“And I think that’s something that we owe to the witnesses who risked their livelihood, their careers, their lives to come forward and describe what the President did to abuse his office,” he added. Video Below

"The American people should have assurances that there's going to be a fair trial and the outcome is not going to be rigged," says @RepSwalwell about Speaker Pelosi's refusal to immediately send the articles of impeachment passed by the House to the Senatehttps://t.co/fPdCU13wAd pic.twitter.com/HTa0DNUGkD

Swalwell struck a different tone compared to that of Senator Chuck Grassley who slammed Pelosi’s tactic in a recent interview and questioned, “Is she saying that they did not give the President a fair trial in the House of Representatives, and she wants to have the Senate do the House’s work? I don’t understand that.”

Grassley went on to point out that the House and Senate do negotiate substance of bills, but he said “they should not be negotiating with us how to do our business.”

However, when asked how long Pelosi can “sit” on articles of impeachment, Grassley said, “Legally, not at all. Politically, as long as she can get away with it.”