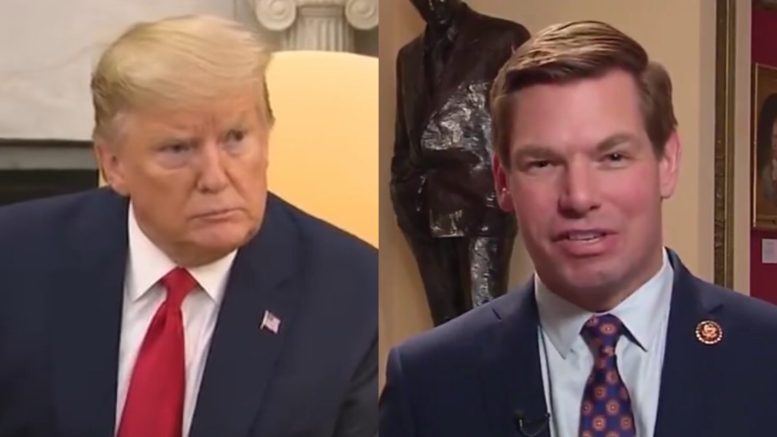 One day before the House of Representatives is expected to vote on two articles of impeachment, President Donald Trump scolded Speaker Nancy Pelosi (D-CA) in a six-page letter, blasting the Democrats’ impeachment inquiry as an “open war on democracy,” and declared that she has “violated her oath of office” and “cheapened the importance of the very ugly word, impeachment!”

Congressman Eric Swalwell (D-CA) told CNN’s Wolf Blitzer Tuesday, that the President’s letter is a “childish” and “whiny”, then demanded that President Trump send documents and witnesses instead.

“The Articles of Impeachment introduced by the House Judiciary Committee are not recognizable under any standard of Constitutional, theory, interpretation, or jurisprudence. They include no crimes, no misdemeanors, and no offenses whatsoever. You have cheapened the importance of the very ugly word, impeachment!” President Trump expressed in his letter to Speaker Pelosi.

“By proceeding with your invalid impeachment, you are violating your oaths of office, you are breaking your allegiance to the Constitution and you are declaring open war on American democracy,” the Commander in Chief continued.

“Everyone, you included, knows what is really happening. Your chosen candidate lost the election in 2016, in an Electoral College landslide (306-227), and you and your party have never recovered from this defeat. You have developed a full-fledged case of what many in the media call Trump Derangement Syndrome and sadly, you will never get over it!” he declared.

“You are unwilling and unable to accept the verdict issued at the ballot box during the great Election of 2016. So you have spent three straight years attempting to overturn the will of the American people and nullify their votes. You view democracy as your enemy!” the President proclaimed in his letter. (Continued Below)

Asked what he thought of the President’s letter, Rep. Swalwell vented: “It’s a tantrum. And Mr. President, we don’t need your childish, whiny letter. Don’t send us that, send us the documents that you have buried and refused to provide to us.”

(Related: Caught On Camera: Swalwell Appears To Break Wind On Live TV While On Hardball, Denies It Was Him)

“Send us the witnesses that you continue to block from us hearing, because unless you send those to us, we can only conclude that you’re guilty. [Be]cause in America, innocent men do not hide and conceal evidence. In fact, they do the opposite. They are forthcoming and they want to cooperate. And the President is acting like a very guilty person right now,” claimed Swalwell. (Video Below)

This impeachment is a scary case study in drive-by accusations without evidence. pic.twitter.com/sEGX2WnJHI

The phrase, “innocent until proven guilty” is a cornerstone of American justice. In criminal court, jurors are instructed to only return a guilty verdict if there is no amount of reasonable doubt that the accused committed the crime. This serves as a preventative measure to keep the innocent out of jail. (Continued Below)


What’s more, the President is granted executive privilege: the right of the president of the United States and other members of the executive branch to maintain confidential communications under certain circumstances within the executive branch and to resist subpoenas and other oversight by the legislative and judicial branches of government in pursuit of particular information or personnel relating to those confidential communications.

Constitutional scholar and George Washington University law professor Jonathan Turley told lawmakers during a House Judiciary impeachment inquiry hearing that it would be an abuse of their power to impeach President Trump.

“I can’t emphasize this enough and I’ll say it just one more time: If you impeach a president, if you make a high crime and misdemeanor out of going to the courts; it is an abuse of power,” Turley said.

“It’s your abuse of power. You’re doing precisely what you’re criticizing the president for doing. We have a third branch that deals with conflicts at the other two branches, and what comes out of there, what you do with it, is the very definition of legitimacy,” he added.

Despite, the Democrats’ impeachment efforts, President Trump is currently leading in the general election according to USA Today:

Letter From President Trump by Fox News on Scribd

(Related: Swalwell: Impeachment Must Move ‘Expeditiously’ Since Trump Poses A ‘Clear & Present Danger’ To The Election)