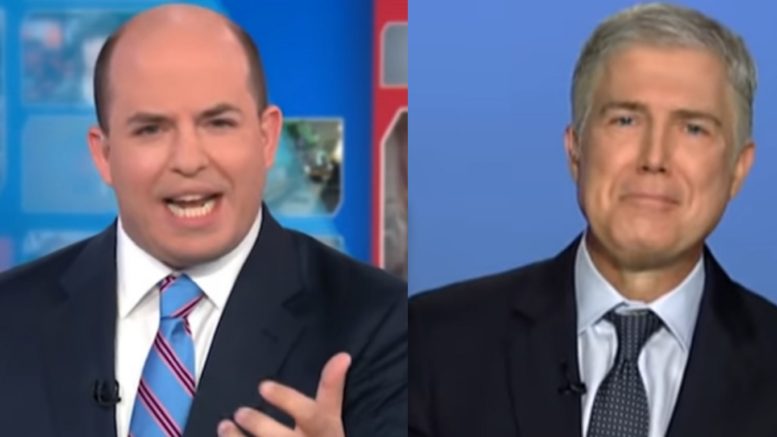 On Tuesday, CNN political commentator Brian Stelter was set off by Supreme Court Justice Neil Gorsuch as he appeared on Fox & Friends for an interview with Ainsley Earhardt, where the pair discussed his book, “A Republic, If You Can Keep It.”

While the interview focused on parts of his book, Gorsuch also answered questions outside of it, including what he thinks one of America’s Founding Fathers would say about today’s government.

“Well, I think one thing [James Madison] might tell us is to pay attention to the separation of powers,” Gorsuch said. He then warned that “only about a third of Americans can name the three branches of government” and he stated, “The truth is that our rights, including the separation of powers, are only as good as the people who want to keep them there.”

Brian Stelter, who appeared to be irritated by Gorsuch’s book being discussed on Fox, speculated on whether the interview strictly had to do with self-promotion.

“How is it appropriate for a Supreme Court justice to try to goose sales of his three-month-old book by chatting on one of the most partisan shows on TV?” Stelter questioned in a tweet. See Below

While the CNN host tried to wrap his head around Gorsuch’s interview, conservative commentator Caleb Hull dug up an old gem from Stelter’s past that didn’t age too well with regards to hypocrisy.

Caleb tweeted, “Brian Stelter is the dumbest person in all of media,” and he posted side by side screen shots of tweets — one from Tuesday that showed Stelter bashing Gorsuch for promoting his book and another from 2018 that ironically showed Stelter promoting a movie CNN broadcasted about Supreme Court Justice Ruth Bader Ginsburg.

The write-up on the movie Stelter promoted was captioned: “She’s called the ‘Notorious RBG’ for a reason. See why fans are inspired and enthralled with Supreme Court Justice Ruth Bader Ginsburg.” See Below

When asked why he didn’t ask a similar question when Supreme Court Justice Sotomayor did a CNN interview about her book, Stelter replied, “I think you missed the key part: ‘one of the most partisan shows on TV.'”

Below is video of Neil Gorsuch’s full interview with Ainsley Earhardt. We’ll let you be the judge on if he was on Fox to “goose sales” of his book.