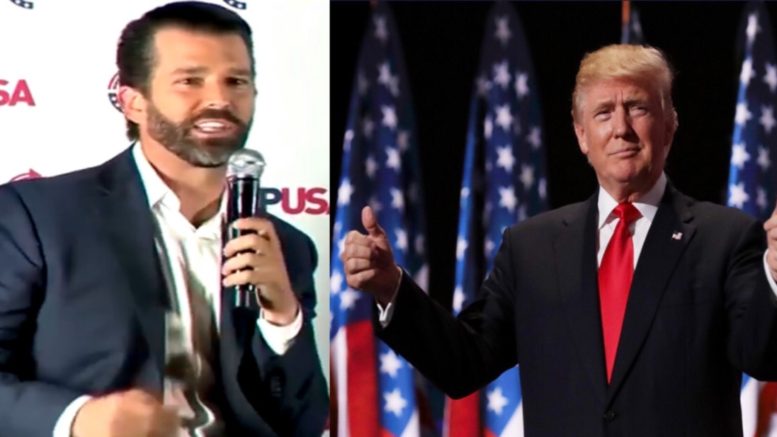 Donald Trump Jr. took to Twitter on Wednesday morning ahead of Democrats casting their vote to impeach President Donald Trump because they hold the majority in the House.

Don Jr. however, revealed eight ways Democrats tried to thwart Trump’s presidency but failed, suggesting he will overcome Democrats’ impeachment efforts, despite everything thrown at him.

Donald Trump Jr. listed eight ways Democrats have failed in their efforts to prevent President Trump from keeping his promises to the America people:

House Speaker Nancy Pelosi (D-CA) said that impeaching President Donald Trump would be politically unwise without the prospect of some support from Republicans. Continued Below

In an interview with The Washington Post last March, Pelosi said, “Impeachment is so divisive to the country that unless there’s something so compelling and overwhelming and bipartisan, I don’t think we should go down that path, because it divides the country.” Continued Below

Amid Democrats’ impeachment efforts, a new Gallup poll released Wednesday morning, shows two things happening since House Democrats, led by Speaker Pelosi, opened up a formal impeachment inquiry in October regarding Trump’s conduct with Zelensky: 1) Trump’s job approval rating has gone from 39% to 45% and 2) Support for Trump’s impeachment and removal has dipped from 52% to 46%.

According to a USA TODAY/Suffolk University Poll, President Donald Trump now leads his top Democratic rivals in his bid for a second term.

They protested his 2016 victory.

Tried to rig the Electoral College.

Objected to certifying the results.

Spied on his transition.

Falsely accused him of treason.

The President tweeted on Wednesday asking for America to say a prayer: “Can you believe that I will be impeached today by the Radical Left, Do Nothing Democrats, AND I DID NOTHING WRONG! A terrible Thing. Read the Transcripts. This should never happen to another President again. Say a PRAYER!”

(Related: Don Jr. Posts The Names & Office Phone Numbers Of 31 Democrats In Trump Districts Ahead Of The Impeachment Vote)

David Schoen Signals ‘Backlash’ For Dems Over Impeachment: “Trump Has Gained Momentum From The Win Here”