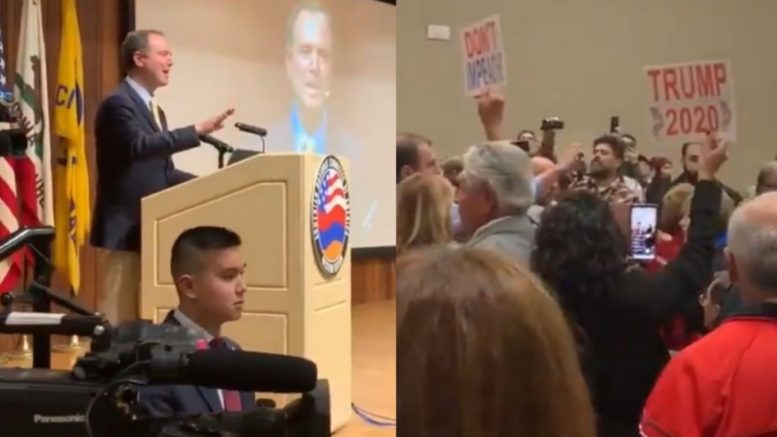 On Saturday, Democrat Congressman Adam Schiff got interrupted by a wave of protestors just as he began to speak at a town hall event regarding the House’s Armenian Genocide Recognition resolution.

According to the Glendale News Press, “an Armenian organization was thanking U.S. government officials for their support of resolutions recognizing the Armenian Genocide.” Schiff, who was a co-sponsor of the resolution, got bombarded by protestors wearing pro-Trump shirts and carrying pro-Trump signage right as he was slated to speak at the Glendale Central Library.

An unidentified attendee of the event captured the entire situation on their smart phone and uploaded it to social media.

In the video, the camera pans from Schiff to a group of protestors who are heard calling Schiff a “liar” and holding one sign that said “Don’t Impeach” and another that said “Trump 2020.”

Schiff asked the protestors to “please sit down,” but they disregarded as one of the men in the group shouted “You should be in jail!” and “We’re gonna take the House! 2020 is ours!”

The rest of the group are then heard chanting “Liar!” over and over. Video Below

Related Article: Sen Graham: Schiff ‘May Be The Most Valuable Player For The Republican Party In The 2020 Election Cycle’

According to the Glendale News Press, “several scuffles broke out throughout the room, and the audience members who were yelling at Schiff removed their jackets. They were wearing pro-President Trump T-shirts.”

The scuffles reportedly simmered down after 15 minutes. No injuries were reported. Video Below