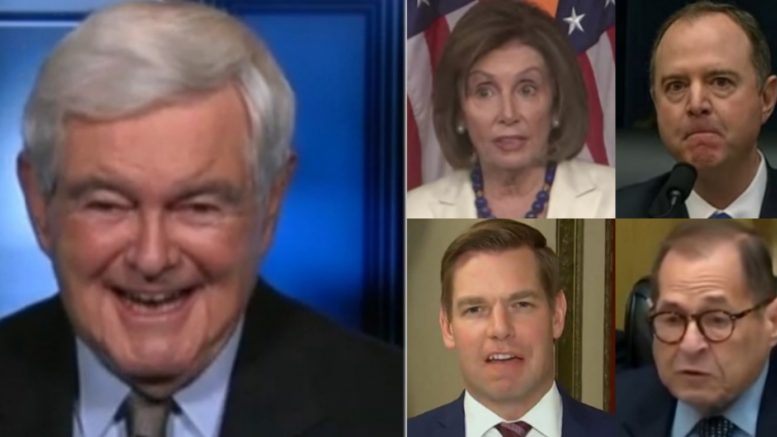 While appearing on Fox & Friends, Newt Gingrich said that he suspects many Democrats will be backing away from the idea of impeaching President Trump over Thanksgiving break.

His comments came in reaction to Democrat Congresswomen Brenda Lawrence who briefly pushed the idea of censuring President Trump before quickly recanting it.

“We are so close to an election. I will tell you sitting here knowing how divided this country is, I don’t see the value of taking him out of office,” Lawrence said on No BS News Hour.

“I want to censure,” she continued. “I want it on the record that the House of Representatives did their job and they told this President and any President coming behind him that this is unacceptable behavior, and under our Constitution, we will not allow it.”

Soon after making the suggestion on censuring Trump, Lawrence declared in a seperate statement, “I still support impeachment,” according to Breibart.

In response to Lawrence’s sign of cold feet, Newt said the normal American has more important things to worry about than impeaching the President. As a result, he suspects more and more Democrats will come to their senses in the coming days, and push for a less extreme approach against President Trump, such as the censure option. Video Below

“For most Americans, this impeachment stuff is Washington junk,” Newt said. “It never reached the level of being real. They think this is politicians yammering at each other.”

“The big loser here has been the news media where over half the country believes that the news media is simply on the side of the Democrats and has nothing to do with the news anymore because they’re a propaganda arm,” he added.

I think the energy that’s going to be available to try to impeach the President is going to go down every single day of the vacation. And I suspect by the time they get back, a lot of Democrats are going to be saying to Nancy Pelosi, ‘Gee, can we find something like censure and just get this thing over with?'” Video Below