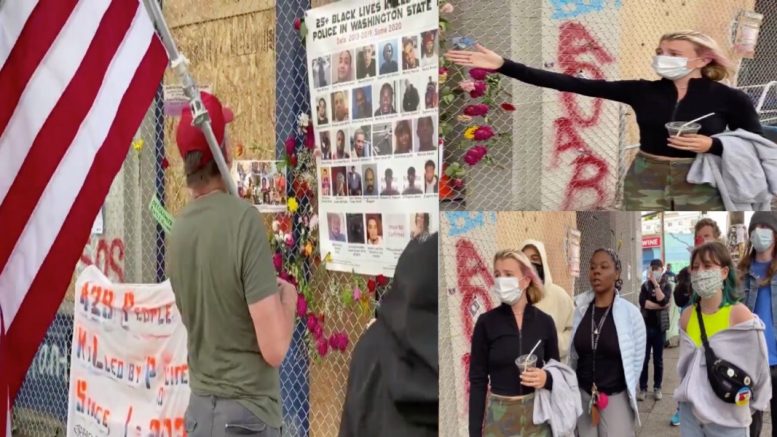 At the Seattle Capitol Hill Autonomous Zone, now know as CHOP, Capitol Hill Organized (or Occupied) Protest, a video was captured of a man toting an American flag, wearing a MAGA hat, and peacefully minding his own business, when he was approached by protesters who harassed him.

In the video, a female is heard telling the patriot, who was minding his own business and looking at pictures at a memorial site: “Hey, sir. This is a really traumatizing space for a lot of people, and I don’t think it is necessary for you to be here.”

The man ignored the lady and continued to look at the pictures while another protester walked up. The protester who approached said, “Please tell me that’s not a Make America Great Again hat. So obviously he came here to stir up sh*t.”

“Anyone got a lighter?” the protester asked, looking around. “I’ll light that b*tch on fire to be honest with you.” Video Below

Watch protesters harass the patriot minding his own business:

Meanwhile over the weekend, other patriots entered CHOP with American flags and were bullied and harassed as well.

Call him a race traitor & imperialist b*tch over the megaphone

One person threw beer onto him and the flag

While a crowd continued to form

American flag stolen from a counter prostester in the #CHAZ
pic.twitter.com/pGosZW8TFZ

Another angle of when the American flag was stolen from a woman by a masked female inside the Seattle “autonomous zone.” #antifa #BlackLivesMatter pic.twitter.com/7SCYVJMceS

Chaos in the Autonomous Zone

A scuffle breaks out

An angry mob chases him out

& no American flags here either

95-Year-Old WWII Vet Gets Emotional As Locals Drive By & Thank Him For His Services: “Never Surrender”