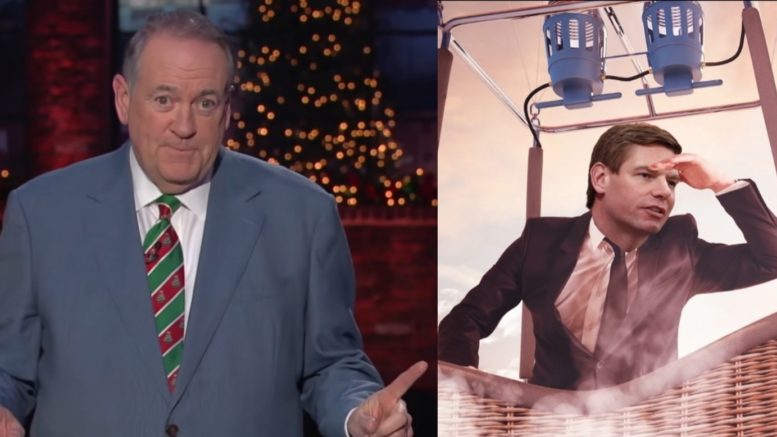 Mike Huckabee was on a roll during Saturday’s airing of Huckabee, as he summarized the entire Democrat-led impeachment process in a nutshell and what to expect of it.

Huckabee slammed the Democrats for trying to remove President Trump for “reasons that are wekaer than this year’s Arkansas Razorbacks football team.”

“I mean, they tried Russian collusion, obstruction of justice, quid pro quo, treasonn extortion, bribery…and using ketchup on well-done steaks,” Huckabee said to his audience as they laughed. “And that’s the closest thing to an impeachbale offense thst the President is guilty of.”

“Now, they had nothing but hot air, and Eric Swalwell provided a lot of that,” Huckabee joked, referring to an episode where it sounded as if Swalwell passed gas while appearing on Hardball With Chris Matthews.

You can see what Huckabee is referring to by CLICKING HERE.

So, they finally pretended to be sad and somber to file articles of impeachment that all but said, ‘We got nothing. We know we got nothing but we hate this President and we hate the people who voted for him.'” Video Below

Huckabee went on to say that Democrat leadership thinks the ordinary voter is “too dumb to be trusted”, so they’ve decided to do the thinking and voting for the American people, which he said will backfire tremendously.

“Well, congratulations Mr. Pelosi, Mr. Schiff, Mr. Nadler and Mrs. Waters. You got what you wanted, but I’ll bet you don’t want what you’re about to get,” Huckabee said as his audience erupted in cheers.

He then declared, “You have lit a fire under the 63 million people who voted for Donald Trump. And I predict there are gonna be millions more who vote for him less than a year from no because these vicious, partisan, heavy-handed maneuvers have now enraged a lot of fair-minded, rational Democrats and Independents who see through this whole sham.” Video Below