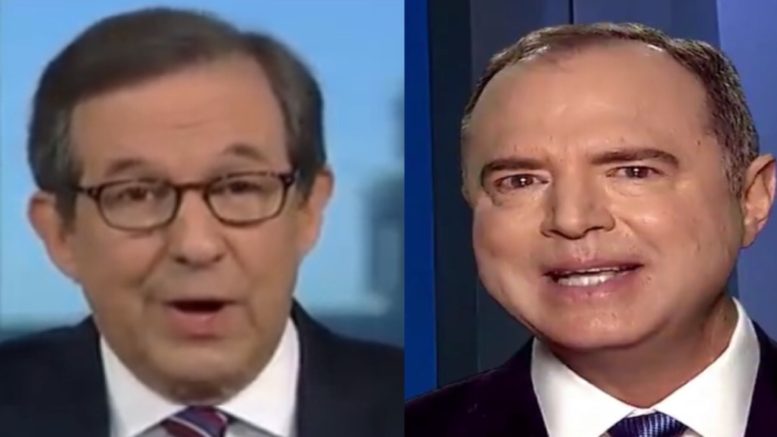 House Intelligence Chairman, Adam Schiff, spoke with host Chris Wallace on “Fox News Sunday” after the Democratic-led House Judiciary Committee voted on Friday the 13th, to adopt their two articles of impeachment, alleging abuse of power and obstruction of Congress, with a straight party-line vote of 23-17. A final roll call in the full House is expected next week.

If impeachment moves to the Senate, President Trump and Republicans have said that they would like to call Schiff to testify as he is a “fact witness”, as it was revealed the anonymous whistleblower had early contact with Schiff’s office, essentially giving them a heads-up about the complaint concerning Trump’s July 25 phone call with Ukranian President Zelensky.

Schiff’s office said that the whistleblower had reached out to them before filing the complaint in mid-August, giving Democrats advance warning of the accusations that led them to launch the impeachment inquiry days later.

Chris Wallace played a clip of President Trump where he said, “I think Adam Schiff is a deranged human being. I think he grew up with a complex for lots of reasons that are obvious. I think he’s a very sick man,” and asked what Schiff thinks of the President’s psychoanalysis, and if his lawyers call him to testify as a witness on the Senate floor, will he comply?

“In terms of the President’s comments, I guess all I would say is this President does nothing, if not project onto others his own misconduct. In terms of whether I’m a witness, I’m not a fact witness in any way, Chris, and the President knows that,” Schiff claimed.

Wallace interjected as Schiff was dodging his question: “Excuse me, sir. I just want to pick up on the one point of the fact witness, because [President Trump] would say that the contact, either you or the member of your staff had with the whistleblower, does make you a fact witness,” he stated.

“Well, the fact that the whistleblower did have contact with my staff doesn’t make me a fact witness,” Schiff suggested. “But none the less, nor does it make the Speaker a fact witness. This isn’t about fact witness.” [Emphasis added].

After Schiff previously stated that President Trump “projects onto others his own misconduct”, he continued, “There are, in fact, members of Congress who are witnesses. Senator Johnson had a discussion with the President. Senator Graham had discussions with the President about the withholding of aid. They may be fact witnesses.” (Video Below)

“We didn’t seek to call them, we’re not seeking to make a circus out of this, but the President is. Because he can’t defend his gross abuse of his office. He can’t defend withholding military aid from an ally at war. The damage he’s done to our national security– all he can do is attack. And sadly, too many of the Republican members are willing to debase themselves by doing whatever the President asks,” Schiff added.

TODAY: Adam Schiff on Trump's call to have him as a witness in the Senate trial. #FNS #FoxNews pic.twitter.com/u48b4K2VAc

(Related: Caught On Camera: Adam Schiff Gets Interrupted By Anti-Impeachment Protestors During His Speech)

WATCH: Romney Gets Confronted At Utah Airport, Passengers Chant ‘Traitor’ After He Boards The Plane