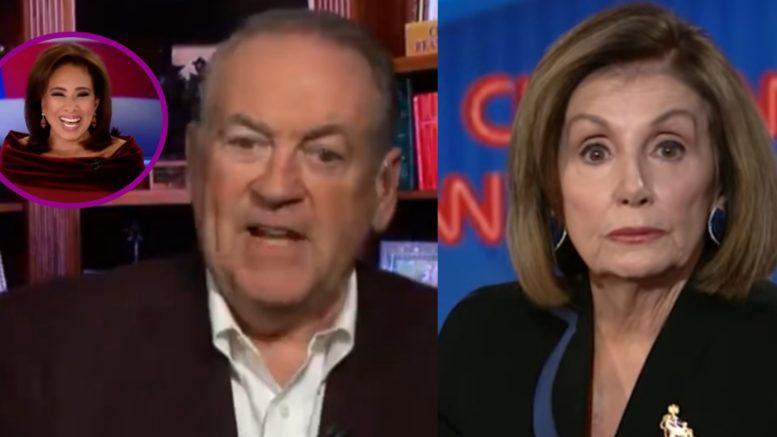 Mike Huckabee slammed Nancy Pelosi over her negativity to the strong jobs report that was released at the end of the week.

According to the report, 266,000 jobs were added in America for the month of November, which is another huge economic win for President Trump and his administration as it exceeded expectations.

In part of her statement to the jobs report, Pelosi said: “Despite some encouraging numbers, the November jobs report offers little solace to the farmers and hard-working families who are struggling to stay above water with the costs of living rising and uncertainty surging.”

Mike Huckabee was pressed on Pelosi’s reaction on Saturday while appearing on Justice With Judge Jeanine.

“And that’s what she’s doing,” Huckabee proclaimed. “The Democrats are just looking for poop!”

He went on to say, “The Democrats need to look at the economy that this President has created, and start celebrating it and start working with him on things like USMCA, then they can have a piece of it.

“But they’re so focused on impeachment and it’s gonna be a Donald Trump landslide in 2020,” Huckabee declared. Video Below

"They are so focused on impeachment, and it's gonna' mean a Donald Trump landslide in 2020." Check out my interview with @GovMikeHuckabee! pic.twitter.com/66odhR2eBo

Donald Trump Jr. Breaks His Silence over the Attack on Pelosi’s Husband: ‘Imagine How Safe the Country Would Be…’