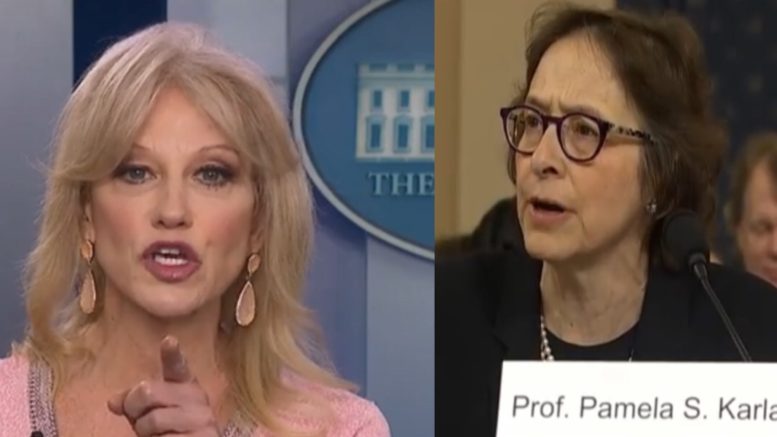 Conway hammered Karlan during an interview on “Fox & Friends” declaring that “she’s had it”, after suggesting the professor “looks down on people”.

“You, ladies and gentleman– if you went to work today to manicure nails, to manicure a lawn, if you went to work with a jackhammer or a welding machine, or mechanic’s tool, or a carpentry belt, and not three-degrees from Yale– that woman yesterday, looks her nose down at you,” Conway suggested. “She thinks you are less than her, and I’ve had it.”

“Do you know why [Donald Trump] ran for president in the first place, for the forgotten man, forgotten woman? You know why I’m still here at the White House? For you.” the counselor to the president explained.

“For people who are looked down upon by people with three Yale law degrees– who have the audacity, … to say that liberals like to cluster together and live together, while Conservatives can’t even stand to be together or scattered. Who the hell are you, lady to look down at half the country?” Conway asked, firing back. [Emphasis added].

Conway went on to say that Karlan was the Democrats’ “star witness” and that she “didn’t educate us,” adding, “She spends her life lecturing people and hobnobs with the elite with the next generation of lawyers.” (Continued Below)

Conway noted that she herself took out “6 figures” to put herself through law school as a single mother, adding that she “resents someone looking down at half of America.”

(Related: Prof. Karlan Uses Barron Trump’s Name To Make A Point During The Hearing, Melania Fires Back: “A Minor Child Deserves Privacy & Kept Out Of Politics”)

“She sounds like Hillary Clinton, the deplorables and irredeemables, and we’re sick of it –people are watching. You want to get the president, you want to look down on him– you look down on the people, [we’re] tired of it,” she vented. (Video Below)

.@KellyannePolls to Karlan:
“Who the hell are you lady?”

Joy Reid Says Trump’s ‘Hungry Constituency Were White’, Who Voted To Take ‘This Country Back From Brown People, The Immigrants’