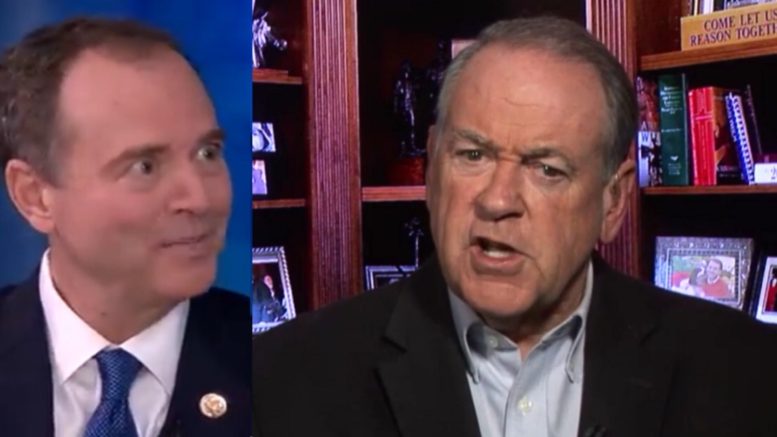 Harris Faulkner began by asking Mike Huckabee, “When you hear lawmakers say, ‘The power of television should be significant when we hear from the witnesses’, does it kind of maybe remind us of the ‘dramatic reading’ that Democrats were hoping for with the Bob Mueller report by Bob Mueller?”

“Well, it does, but it also reminds me that this is not about facts, this is not about some genuine concern that the president has done something wrong,” the former Arkansas Governor said. “This is a ‘television show’. It’s all about trying to create some kind of environment and ‘to create a spectacle’”. [Emphasis added].

“Adam Schiff loves television cameras. I’ve never seen anyone who would risk his life to jump in front of one like he does and he’s eaten this up,” Huckabee continued. “But the fact is they’ve gone all over the board from Russia, to obstruction of justice, to racism, to quid pro quo, now it’s extortion and bribery.”

“They keep coming up with a new reason to impeach him, but let’s make sure the Republicans put this in context, and context is everything in this case. This goes back to even before President Trump sworn in. They were talking impeachment from the beginning. They just keep looking for a different reason to do it,” Huckabee added. (Continued Below)

Three top Republicans serving on panels involved in the Democratic-led impeachment inquiry into Trump penned an 18-page memo to fellow Republican members, which outlines “four key points of evidence” that show no crime was committed:

On Monday, Republicans sent an 18-page memo to fellow Republican members, which outlines “four key points of evidence”, detailing that no crime was committed. Their memo makes the case that Democrats failed to present any evidence of quid pro quo in President Trump’s July 25 call with Ukrainian President Volodymyr Zelensky.

“This is an impeachment in search of a reason,” Huckabee expressed. (Video Below)

Ratcliffe: ‘I Would Expect & Anticipate… Quite a Few More Indictments’ Related To Durham’s Investigation