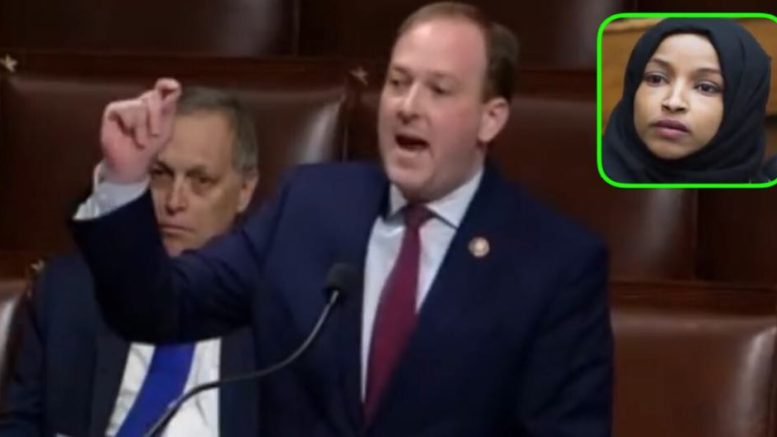 The House passed a resolution Thursday 407-23 condemning anti-Semitism and other bigotry, following a week in which questions about how to respond to Rep. Ilhan Omar’s (D-MN) controversial comments on Israel threatened to divide the Democratic caucus.

Before the resolution passed in the House, Rep. Lee Zeldin (R-NY) called out Omar’s Anti-semitic statements on the House floor in a fiery speech. (Video Below)

According to Axios, tensions over the resolution, which was briefly delayed, reportedly ran high in an emergency meeting called by Pelosi on Wednesday — with some Democrats claiming that Omar had been unfairly singled out. Rep. Elliot Engel, chair of the House Foreign Affairs Committee and one of the Democrats who harshly condemned Omar’s comments, voted for the resolution but said on the House floor: “I am very disappointed we weren’t able to have a separate resolution that condemns anti-Semitism.”

During a press conference, Pelosi claimed of Omar, “It’s not about her, it’s about these forms of hatred. I feel confident that her words were not based on any anti-Semitic attitude, but that she didn’t have a full appreciation for how they landed on other people. These words have a history and a cultural impact that might have been unknown to her.”

Rep. Lee Zeldin took the House floor where he gave his thoughts on the current situation at hand.

“Let’s all be honest with each other. We are here right now because of anti-semitic rhetoric from one member of this chamber who said again and again and again. We would not be on this floor right now otherwise to discuss this topic.” Zeldin pointed out. “If that member were a Republican that members name would be in this resolution, and this resolution would be about all condemning anti-semitism, and it would be done so, forcefully.” (Video Below)

Zeldin pointed out that Omar had to apologize for previous statements, even though she filled it with “equivocation”, and noted that she made yet again, more remarks but refused to apologize.

“Even if you gave that member every benefit of the doubt that she had no idea what she was doing, why now wouldn’t she be apologizing? Why would she be more emboldened to refuse an apology all together?” Zeldin asked.

“I apparently am giving Rep. Omar more credit than the Speaker is, because I don’t believe she is nieve. I believe she knows exactly what she is doing!” Zeldin declared. (Video Below)

Zeldin explained it is not an American value to hurl anti semitic rhetoric. “Anti-semitism must be condemned, unequivocally and emphatically.”

He didn’t stop there as he pointed out that members of the chamber associate with Louis Farrakhan, who said “Hitler was a very great man!” Zeldin added, “Let’s talk about a double standard,” as he expressed how Rep. Steve King was let go of his committee duties after remarks he made, but Omar is still allowed to remain the House Foreign Affairs Committee.

“It’s time to call out these statements for what they are: pointed, bigoted, unreasonable, illegitimate, anti-semitic.” Zeldin said bluntly.

Related: Trump Takes A Swipe At Dems Before Departing To AL: ‘Democrats Have Become An Anti-Jewish Party’

Before yielding back, the New York representative praised his fellow colleagues on the other side of the table for doing that same in condemning the remarks. “Thank you to each and everyone one of them, because support of Israel, support of Jews, standing against anti-semitism has been bipartisan in the past, it should be bipartisan today, and it should be bipartisan for every moment in the future.” He asserted. (Video Below)

Related: Hannity Exposes Why Nancy Pelosi Is Not Taking A Stand Against Omar: ‘Pelosi Is Terrified Of Being Overthrown’