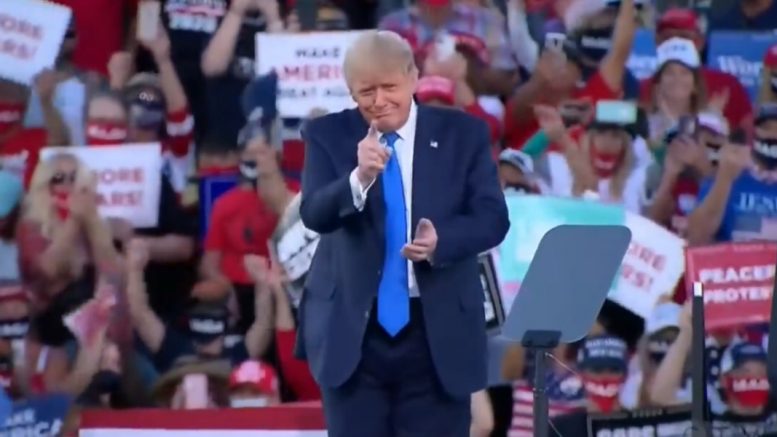 The 45th President issued a lengthy statement via “From the Desk of Donald J. Trump” on Monday as some in the mainstream media have conceded that “All Republican roads lead to Mar-a-Lago” for 2024.

“Highly respected pollster John McLaughlin says 73% of all Republicans want Trump to run again in 2024 and Republican primary voters would support him 82%-13%,” the president began in his statement of latest monthly May national poll.

“What WaPo and other members of the Fake News Media don’t report is that Joe Biden is of no interest to anybody — 21 million less people watched his Joint Address to Congress than watched mine,” Trump pointed out.

“Also, Biden’s ratings have killed the Radical Left Fake News Cable Channels. MSNBC and CNN have plummeted in the ratings. MSNBC doesn’t have a show in the top 10 of all cable news programs, and CNN doesn’t even have a show in the top 100. They should have embraced and endorsed ‘Trump’ — their ratings would have been at new highs!” the former president suggested. Continued Below

President Trump also explained why he has been “doing very limited media” since leaving office, noting he “was right” about what the “Biden Administration” would do.

“I have been doing very limited media so the American public could see just how big of a disaster the Biden Administration has been, and I was right. Inflation, the Border Crisis, our forgotten Military, war in the Middle East, all as a result of Biden’s mistakes. Our Country is being destroyed. Watch, it’s only going to get worse!” he expressed.

“The Washington Post also incorrectly reported about my DonaldJTrump.com website viewership,” the former president said. “We have not yet launched our own social media ‘platform,’ but even the very basic site we have to post our statements has received 36.7 million views over the past month alone, and we’re getting more traffic to our website now than in 2020, an Election year!”

“This number would be even greater if we were still on Twitter and Facebook, but since Big Tech has illegally banned me, tens of millions of our supporters have stopped using these platforms because they’ve become ‘boring’ and nasty,” Trump proclaimed.

“My website is a place where everyone can see my statements, issued in real time, and engage with the MAGA Movement. This is meant to be a temporary way of getting my thoughts and ideas out to the public without the Fake News spin, but the website is not a ‘platform,'” the 45th President explained.

“It is merely a way of communicating until I decide on what the future will be for the choice or establishment of a platform. It will happen soon. Stay tuned!” he announced. Continued Below

The 45th President’s official statement via “From The Desk of Donald J. Trump”: 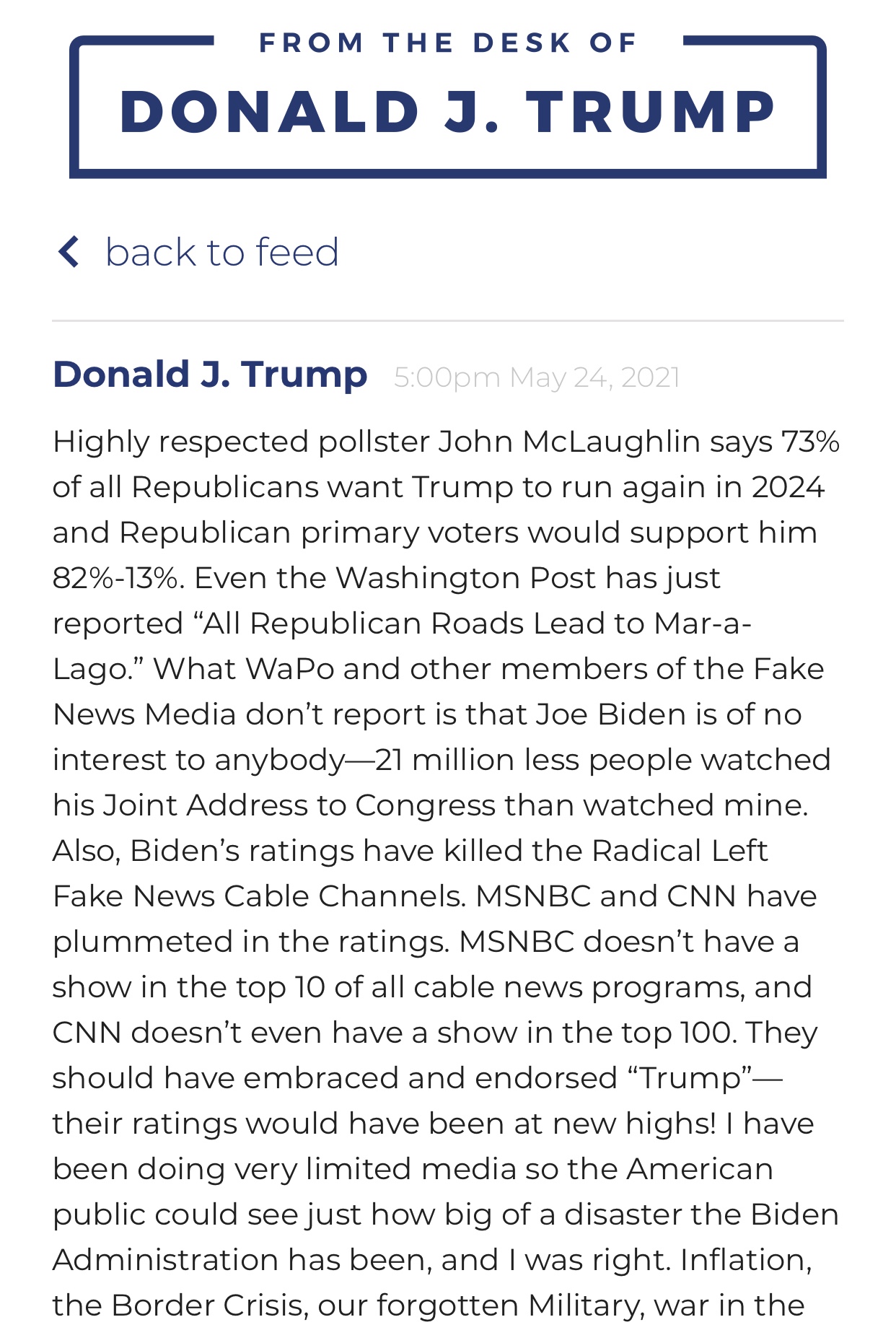 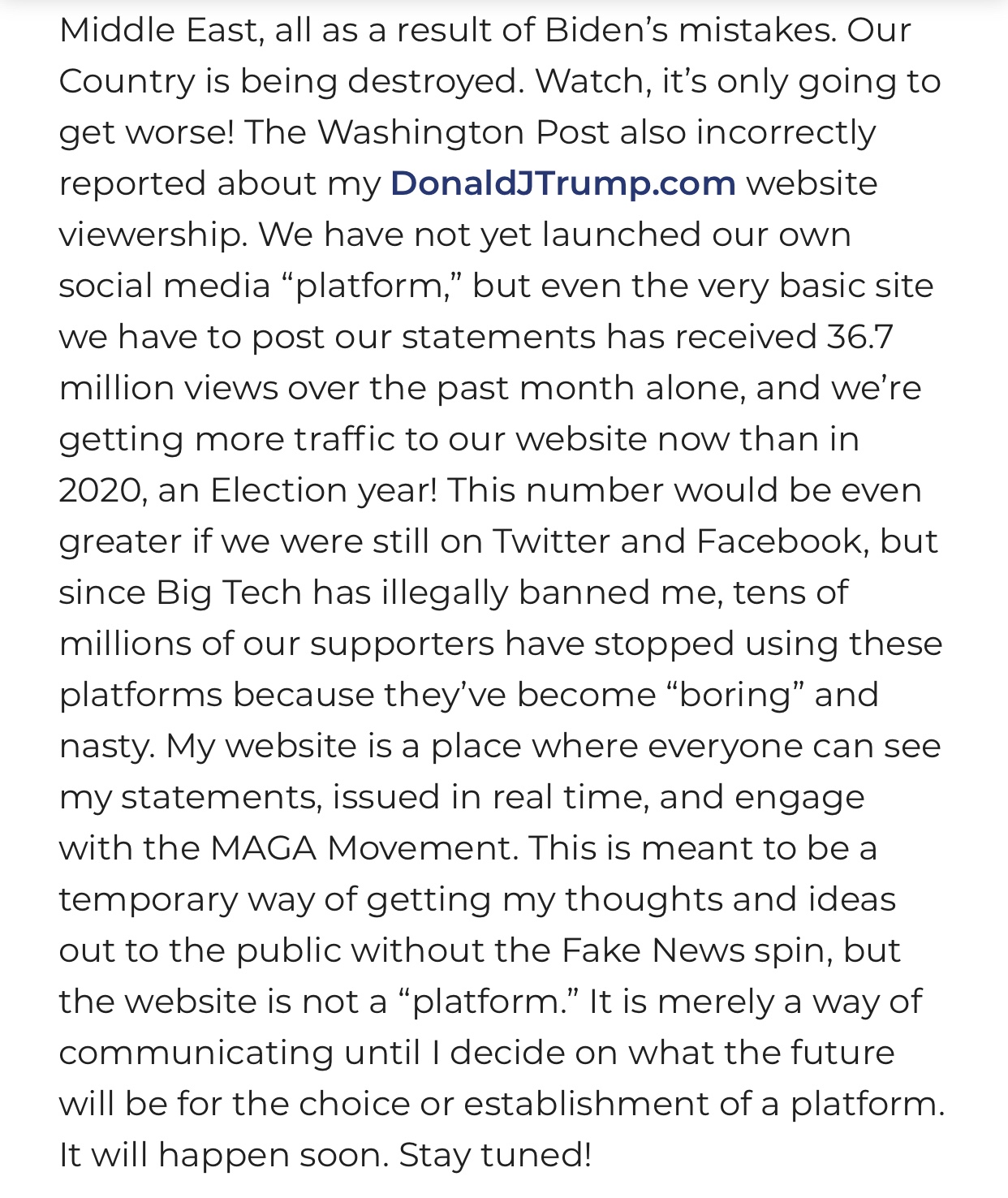