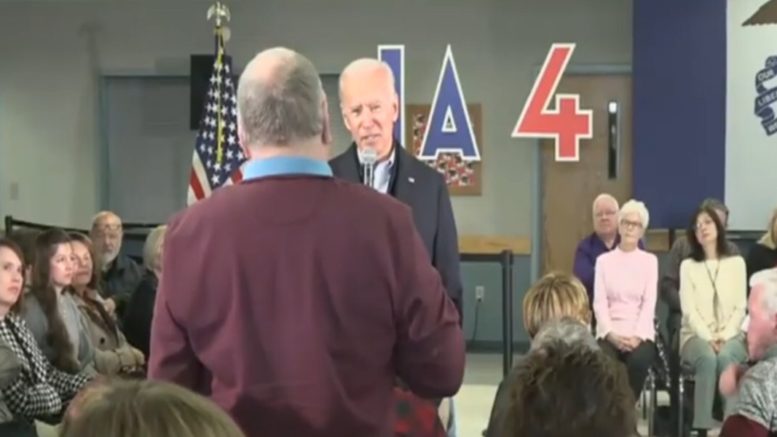 During one of Joe Biden’s Iowa campaign stops in Iowa, an audience member on Thursday, directly asked the former vice president about his son Hunter Biden’s dealings with the Ukranian gas company, Burisma.

The man told Biden that he sent his son Hunter Biden to work for Burisma and that Hunter had no experience with energy.

After some back and forth, Biden told the man, “By the way … I’m not sedentary,” before going on to challenge him to a push-up contest and other physical tests.

“You want to check my shape man, let’s do pushups together here, man,” Biden told him. “Let’s run. Let’s do whatever you want to do. Let’s take an IQ test. OK?”

When the man replied that he wouldn’t be voting for Biden in the primary, the former vice president replied: “Of course you’re not; you’re too old to vote for me!” Biden also called the man “fat”. (Continued Below)

Last month during a town hall in South Carolina, Biden was confronted by the Cosecha Movement, who are immigration activists, and they showed up to protest former President Barack Obama’s deportation record.

One particular protester, who asked the former vice president a question about “ending all deportation of illegal immigrants”, was directed by Biden to vote for Trump. “You should vote for Trump,” Biden told the audience member. (Video Below)

Watch as the Iowa audience member asked Joe Biden about his son Hunter’s dealings with Burisma:

Democrat voter asks Biden about his son getting corrupt million$ from a Ukrainian gas company while Biden was VP.

Joe Biden further told Fox News reporter, Peter Doocy, that he “will not appear voluntarily if called to testify in the impeachment proceedings”:

Trump on the Ukraine Invasion: ‘It Would Not Have Happened if Our Administration Were in Place… Not Even Close’