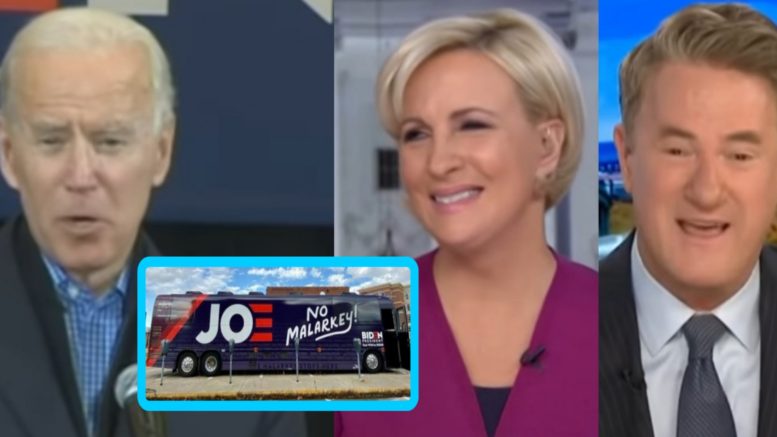 For whatever reason, Biden named his Iowa bus tour the “No Malarkey” tour, which prompted him to get blasted by people on both side of the aisle.

Brzezinski sarcastically asked Scarborough, “No Malarkey…does that work? I mean, I kinda like it, I think. I guess, what is ‘Malarkey’?”

“Actually it is a fantastic campaign slogan for Cork in like 1956,” Scarborough added as everyone on the set laughed.

Scarborough mocked Biden’s campaign slogan even more when he said: “I’m a 50’s guy. I go around saying things that dudes in their mid-80’s say. Yes, he is owning it. He’s putting it on the side of his bus.”

“If that makes him more comfortable on the campaign trail, so be it, Jedi,” he said. “Which of course, if I ever run a campaign, that’s what I’m gonna have on the side of my bus. So be it, Jedi.”

Then when handing it off to Jim Vandehei of Axios, Scarborough declared, “Somebody has apparently spiked Joe Biden’s milk of magnesia.” Video Below

Joe Biden can’t even catch a break from left-leaning MSNBC!

In ending, here is Mike Huckabee’s reaction to the “No Malarkey” bus tour.

Once there was a man named Biden
In Iowa a big bus he was ridin'
He said @realDonaldTrump was too snarkey
So he promised "No Malarkey!"
And now all his voters are a hidin'https://t.co/kjbAA4AKn2

Sen. Scott On The ‘Bounce Back’ He Expects In The Outcome The Crisis: “We Will Not Only Survive But Thrive”