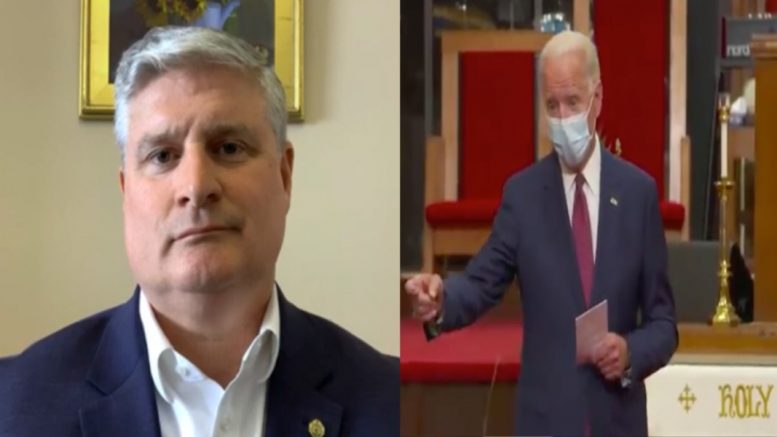 Bill Johnson, executive director of the National Association of Police Organizations said of Biden: “For Joe Biden, police are shaking their heads because he used to be a stand-up guy who backed law enforcement. … Clearly, he’s made a lot of changes the way candidates do during the primary process, but he kept moving left and fell off the deep end.”

Though many police tend to lean to the right politically, the criticism from the National Association of Police Organizations is new. NAPO endorsed Barack Obama in 2008 and 2012 because of Biden’s presence on the ticket, Politico reported.

Thomas H. Mungeer told “Fox & Friends”: “It’s amazing. Mr. Biden, has shown support for the police in the past. I know with my counterparts in Delaware state police when he was Senator, he was very supportive.”

“I was at the vice president’s house in 2006, with a contingent of troopers from the national troopers coalition. We were warmly received. But anyone who comes out with a statement: ‘just shoot ’em in the leg’, when an unarmed, knife-welding person is coming at you,” Mungeer said of Biden’s recent statement.

While speaking at a historically black Church in Wilmington, Delaware on Monday, Biden told black community leaders, “And the idea of someone standing there and teaching a cop who is an unarmed person coming at ’em with a knife or something, shoot ’em in the leg, instead of the heart is a very different thing. There are a lot of things that can change.” Continued Below

Mungeer said that he “can’t see anyone get behind” Biden with that mindset, adding, “You’re seeing it more with politicians, and it’s advantageous to stand by police when the times are good, and when they’re not so good, let’s go turn against them. We’re seeing it across the country, and unfortunately Mr. Biden has followed suit.”

Asked what advice he would give Joe Biden going forward, Mungeer suggested, “Again, he has to retract that statement. In his police reform package, I wonder if he has funding to retrain the 800,000 sworn police officers in the United States to react to an armed suspect coming at him. I don’t know if he can right it. It’s gonna have to be a complete 180 degree turn, and I guess the jury is still out the remaining months before November.”

“We have somebody in the White House right now that has shown support for the police continually, so I wold say say, Mr. Biden has a long way to go. He had a good track record years ago, but again, I echo Bill Johnson’s comments that he’s gone so far left that he’s practically falling off of it,” he added. Video Below

“Biden hasn’t said a single word on one of the most horrific aspects of the bloodshed: attacks by rioters and looters, sometimes fatal, on police officers in the line of duty protecting innocent Americans,” the Trump campaign said in a Wednesday email that highlighted police deaths and injuries in eight instances nationwide, Politico reported.

On Friday, President Trump tweeted that Biden “wants to defund the police”.

This comes after former acting Director of National Intelligence Richard Grenell criticized Hillary Clinton’s former national press secretary, when he called for police departments to be defunded across the country in a tweet Wednesday.

The tweet was from Brian Fallon, who is also a former spokesman for the Justice Department under former Attorney General Eric Holder. He is now the executive director of Demand Justice, a progressive group that works to get liberal justices appointed to federal courts.

This must be widely condemned by the Biden campaign immediately. https://t.co/u92QBpgKBs

There have been other calls for police departments to be defunded in the wake of the death of George Floyd.

An online petition has been launched and backed by singer John Legend, soccer star Megan Rapinoe and actresses Natalie Portman and Jane Fonda, among others, to defund police departments across the country.

It’s time for a re-imagining of the role that police play in our communities. https://t.co/UhGIzKvADx