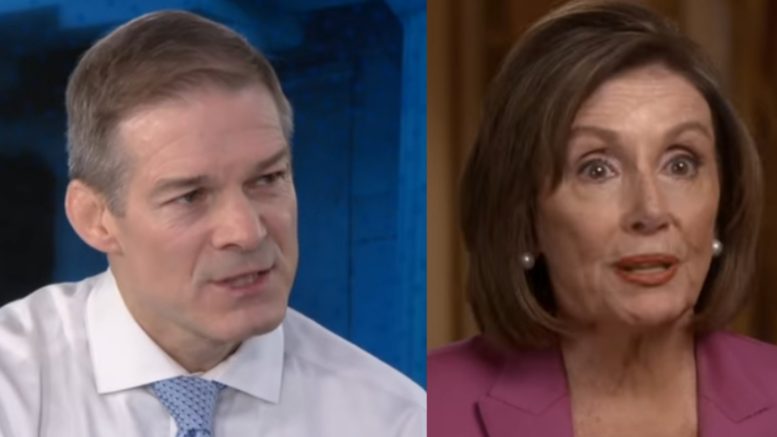 While appearing on Face The Nation with Margaret Brennan, Congressman Jim Jordan reacted to House Speaker Nancy Pelosi’s latest controversial remarks, where she referred to President Trump as an “imposter.”

Pelosi made the statement during an interview with Brennan that aired moments before Jordan sat down for his interview with the same host. The House Speaker was discussing President Trump’s tweet about former Ambassador Marie Yovanovitch as she testified in Friday’s public impeachment hearing.

“He should not frivolously throw out insults, but that’s what he does,” Pelosi said. “I think part of it is his own insecurity as an imposter. I think he knows full well he’s in that office way over his head.”

In his reaction to Pelosi’s remarks, Jordan said, “The scary thing is the Democrats have been out to get this President.”

He then told Brennan: “I was struck by listening to Speaker Pelosi’s comments. Her answer to your second question, she used the word ‘imposter.'”

“I’m talking about the President of the United States who 63 million people voted for who won an Electoral College landslide,” he added. “And yet, these Democrats have been trying to get him since the start of this Congress.”

“Congresswoman Tlaib said she wants to impeach him before any evidence [came out],” Jordan said. “Five members on the intelligence committee have voted to move forward with impeachment even before the whistleblower complaint was filed.” Video Below

.@SpeakerPelosi called the President of the United States an "imposter."

What an insult to the 63 million Americans who voted for President Trump and gave him an Electoral College landslide. pic.twitter.com/Zo0DEVQtx3

Here is video of Jordan’s full interview on Face The Nation: