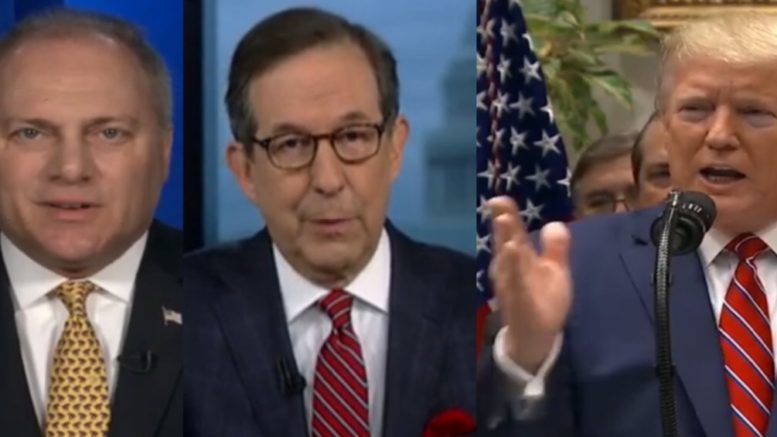 The President, however, on Sunday afternoon, blasted Wallace after the “Fox News Sunday” anchor pressed Scalise on the Democratic-led House impeachment inquiry.

President Trump took to Twitter Sunday afternoon and ripped Wallace over what appeared to be his “impeachment coverage”, including unfavorably comparing to him his father.

“@SteveScalise blew the nasty & obnoxious Chris Wallace (will never be his father, Mike!) away on Chris’s lowest rated (unless I’m on) morning show. This kind of dumb and unfair interview would never have happened in the FoxNews past. Great job Steve!” the President tweeted.

During his interview with Scalise Sunday, Chirs Wallace pressed the House Minority Whip on his characterization of the diplomats who have testified before the House Intelligence Committee in the past week as “[Committee Chair Adam] Schiff’s witnesses,” along with Gordon Sondland who is set to testify this week.

“If Gordon Sondland, who met with the President a half dozen times this summer, testifies on Wednesday, [and says] ‘Yep, the President said to me we’re not releasing the aid, until they announce they’re gonna investigate the Bidens and Burisma’, doesn’t that blow a hole in the President’s defense?” Wallace asked Scalise. (Continued Below)

“The President’s defense is that those things didn’t happen. And it’s not just the President’s word, President Zelensky himself said that the aid wasn’t conditioned and there was no pressure. And then, because of some of these innuendos that you’re talking about, the foreign minister, just a few days ago, released another statement saying that there was never a link between aid and investigations. And once again, there were only two people that participated in that one call. It was Donald Trump and President Zelensky,” Scalise explained.

“Both of them were very happy with the phone call. Zelensky said there was no pressure. And the real bottom line is: he got the money. Ukraine got the money,” he added. … “You can bring up people that had third and fourth-hand information. I thought this was supposed to be about finding facts. And if they’re gonna try to impeach a President of the United States, shouldn’t it be based on something that actually happened, versus one person’s opinion of a third-hand conversation? That’s really what this is all about.”

Scalise also noted: “President Trump released the aid when he made sure by law, and Pelosi voted for that law, Schiff for the law, that requires that he ensures corruption is being rooted out before taxpayer money goes to a country like that.” [Emphasized].

(Related: Nancy Pelosi Calls President Trump An “Imposter,” Jim Jordan Reacts: “Democrats Have Been Trying To Get Him Since The Start Of Congress”)