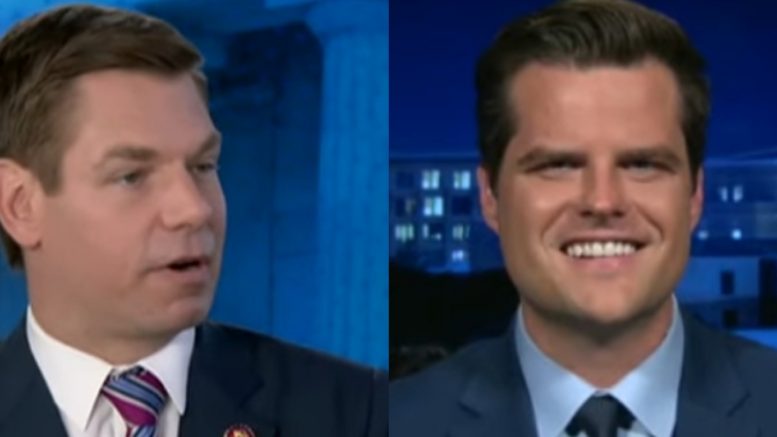 Swalwell made his claim in an interview with CBS that came just days before public impeachment hearings are set to begin.

“We have enough evidence from the depositions that we’ve done to warrant bringing this forward — evidence of an extortion scheme using tax payer dollars to ask a foreign government to investigate a foreign opponent,” Swalwell said Sunday on Face The Nation.

Related Article: Mark Levin Stops The Tape & Roasts Eric Swalwell During His Impeachment Commentary: ‘Why Is This Guy On TV All The Time?’

“I like Eric Swalwell — he’s a talented guy — but I’m still waiting for Eric Swalwell’s last Doomsday predictions from this administration are going to come true,” Gaetz said.

“I don’t understand why anyone takes Eric seriously when he talks about, you know, the end of the presidency being right around the corner,” he continued. “He said precisely the same thing in the Russia investigation.”

“My advice for the Democrats would be, maybe bench the Schiff/Swalwell team that all told us the President was getting impeached over Russia and maybe hand this off to people, you know, on the more moderate side — some of these people in the Trump-won districts, and have them take a look at it with more objectivity because it’s just hard to believe these folks who gsve us these outrageous claims before,” Gaetz declared. Video Below