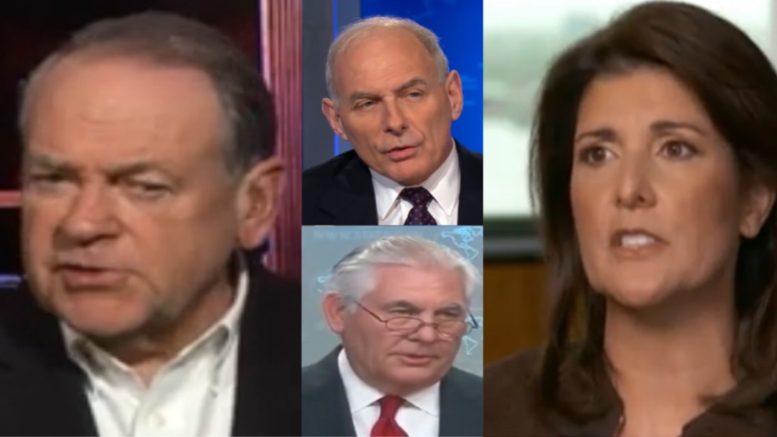 “Kelly and Tillerson confided in me that when they resisted the president, they weren’t being insubordinate. They were trying to save the country…” Haley wrote in her new book, “With All Due Respect.” And during a CBS News interview about the book, she said that she was offended that Kelly and Tillerson tried to enlist her in their effort, instead of going to the president firsthand with their differences.

“It absolutely happened,” Haley said in a CBS News interview. “And instead of saying that to me, they should’ve been saying that to the president, not asking me to join them on their sidebar plan. It should’ve been, ‘Go tell the president what your differences are, and quit if you don’t like what he’s doing.’ But to undermine a president is really a very dangerous thing. And it goes against the Constitution, and it goes against what the American people want. And it was offensive.”

“I’ve got nothing but great respect for John Kelly. He earned 4 stars on his shoulder and I have nothing but respect for that. But there’s something about Nikki Haley– I totally agree with her. And I applaud her for her candor, but also, her insight into something very simple that both of these guys should have understood. Nikki Haley had something they didn’t, and maybe that’s why she understood it. She had been elected to something. She had been governor, she knew what it was like to have been elected by the people,” Huckabee said.

“She recognized that is the calling and that when someone serves at the pleasure of the elected person, it is not their job to arrogantly assume that they know more than he does, that their opinions are more right than his is. And I think for Rex Tillerson, and even for General Kelly, to suggest that somehow they have the right to go around the elected president, for his own benefit– that’s insulting, it’s arrogant. It’s just plain out ‘constitutionally wrong,'” he expressed. [Emphasized]. (Continued Below)

General John Kelly put out a statement after Haley’s comments: “If by resistance and stalling, she means putting a staff process in place… to ensure the [president] knew all pros and cons of what policy decision he might be contemplating so he could make an informed decision, then guilty as charged,” he said.

“He may not like them, he may not agree with them. He has the right to leave. He does not have the right to act like he got elected, when in fact, he didn’t. Donald Trump got elected, and it’s his policies that matter,” Huckabee added. (Continued Below)

Asked what he thinks is Nikki Haley’s goal is by putting out the information in her book, Huckabee replied, “I think she’s telling the story, a good story that she has. She served this president very admirably. And I think one of the things Nikki Haley is pointing out is that as a former chief executive, she understood that there was a role she could play in [by] going directly to the president and expressing her views, which she did on more than one occasion.”

“She didn’t make a public press conference out of it. She didn’t go and wave flags about it. But once she presented it, she accepted his response, whatever that was, and she went back to work. That’s how it’s supposed to work, and I think Nikki Haley really did herself quite well by telling the story in the way she did,” he said.

“By contrast, Rex Tillerson was never elected. I think the problem with [him] from the beginning, he had run a big corporation, Exon Mobile. He went into the State Department as if he ran the State Department, and his ideas were what mattered. I think he had a hard time accepting that he worked at the pleasure of the president, and it was not his policies that were supposed to be instituted, it was the presidents,” Huckabee pointed out. (Video Below)

(Related: Huckabee Creates A Fresh Nickname For CNN As Paragraph #22 Of Their Report Discredits The Whistleblower

James Woods Reacts As Rachel Maddow Is Caught Crying Over The Mueller Report: ‘Dear God, This Is So Much Fun’