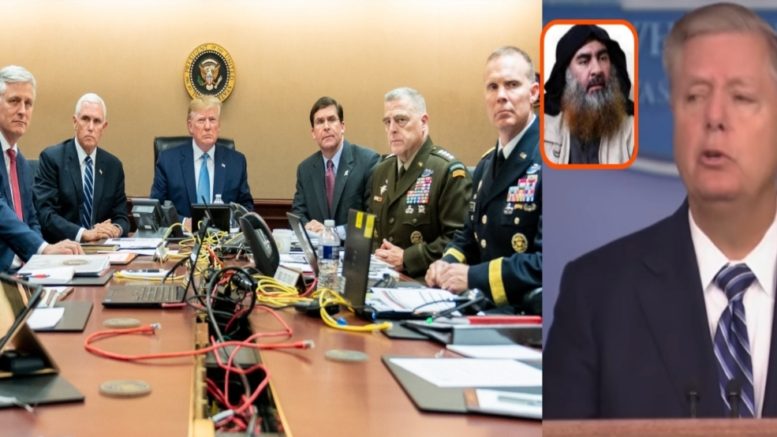 Senator Lindsey Graham made a statement and took questions from reporters straight from the White House press room on Sunday following the announcement that ISIS leader Abu Bakr al-Baghdadi had been killed in a raid.

Graham, who just so happened to be in Washington, DC this weekend, said in the press conference that he is very encouraged by President Trump’s strategy, despite recently voicing criticism of it.

“The focus is on building up the lives of people in the region, having a small footprint of Americans led by local populations, and securing the oil — is a really smart idea, quite frankly. That’s how ISIS survived for so long,” Graham said. “What I see developing in Syria is very promising.”

Graham then made clear with reporters that his position and the President’s position is “really not that far off”. “We really don’t need a lot of Americans in the safe zone. The international community should do that,” he said.

“When it comes to terrorism, the President changed the rules of engagement. You think the caliphate destroyed itself?” Graham asked. “He made a conscious decision when he went to Iraq to change the game to destroying ISIS.”

“He’s had a determination to destroying the caliphate unlike anyone I’ve ever met,” he declared. “Now the question is ‘How to keep it down?’ I think we got a plan now to keep it down that meets his national security objectives of reducing our footprint and having others do more.” Video Below

Graham then responded to a reporter who pressed him on if he changed his mind on earlier criticism related to Trump pulling troops out.

“What I’m saying today is the killing of Baghdadi is a gamechanger in the war on terror. [It] doesn’t mean the war is over. The President’s determination over time has paid off,” Graham replied. “We don’t give him enough credit for destroying the caliphate. He did this within months, not years because he changed the rules of engagement. So, what I want to talk about today is the brave men and women who planned the operation, who went in on the ground ad killed this bastard.”

Related Article: Pres Trump On Why He Didn’t Inform All Congressional Leaders About Plan To Raid Baghdadi: ‘Washington Is A Leaking Machine’