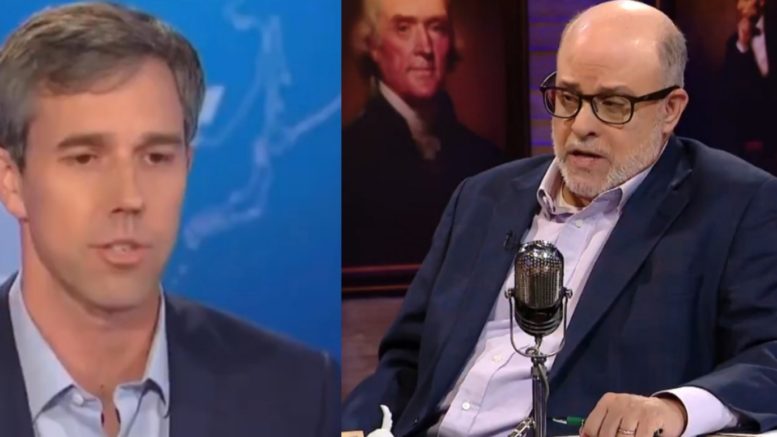 On Tuesday, Mark Levin broke his silence on Democrat Presidential candidate Beto O’Rourke’s comparison of President Trump’s leadership to that of Nazi Germany.

Beto initially compared the President’s leadership to Nazi Germany while being interviewed by Al Sharpton. He then doubled down on the Nazi remarks and also made his case for why Trump is a Russian “asset” when interviewed by CNN’s Wolf Blitzer a day later.

While giving Beto a chance to clarify his remarks,  Blitzer reminded him that most people think any comparison to Nazis is almost always “unacceptable.”

Beto doubled down and said, “It’s the comparison of last resort, and that’s where we are.”

In a video uploaded to Twitter on Tuesday, Mark Levin defiantly responded to Beto’s comparison and ideology.

“No, it’s not where we are you jackass!” Levin said. Video Below

Related Article: O’Reilly Rips Beto For Saying Trump Is Russian ‘Asset’ & Leads Like A Nazi: ‘Beto Is Finished In The Political Arena Forever’

“Where millions of people are being pulled from their homes and rounded up and transported against their wishes to extermination camps,” he continued. “Where their teeth, where their hair, where their skin is used to make products.”

“No, that’s not where we are, you sicko,” Levin added. “Adolf Hitler, Mein Kopf, extermination camps, gas chambers, gas showers, mass executions, mass graves — No we’re not there! And it is outrageous that a man who wants to be President of the United States compares us to Nazi Germany and the Third Reich.” Video Below

Obama Claims Trump ‘Shows No Interest In Putting In The Work’, Terrence Williams Fires Back: “Shut Up!”