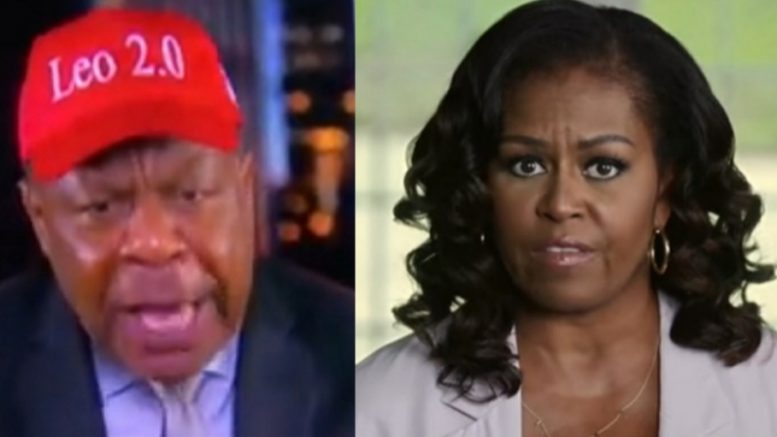 Former First Lady Michelle Obama delivered her closing message to Americans in a video released on Tuesday, where she claimed that President Donald Trump and his allies are “stoking fears about Black and Brown Americans” in the election cycle and called Trump “morally wrong” and “racist.”

“But right now, the President and his allies are trying to tap into that frustration and distract from his breathtaking failures by giving folks someone to blame other than them,” Obama said. “They’re stoking fears about Black and Brown Americans, lying about how minorities will destroy the suburbs, whipping up violence and intimidation — and they’re pinning it all on what’s been an overwhelmingly peaceful movement for racial solidarity.”

“So what the President is doing is, once again, patently false. It’s morally wrong and yes, it is racist. But that doesn’t mean it won’t work,” she added.

In response, longtime Democrat commentator and civil rights attorney Leo Terrell slammed Michelle Obama trying to make Americans “disbelieve” the “chaos and the burning” that has been taking place in Democrat-run cities. He then listed several positive things President Trump has done for Black Americans, and challenged the former First Lady to name one thing that the Obama/Biden Administration did to help the black population.

“Respectfully, the First Lady lied in that video because the protests — everyone in this country can see the chaos and the burning in these Democratic cities,” Leo told Sean Hannity during his Tuesday night program. “And she wants us to disbelieve what we see and that really eloquent approach as if she really cares. She lives in a very wealthy area.”

“The reason why Donald Trump got elected is because this country rejected the Biden/Obama Administration, and that is why we’re here today,” he proclaimed

“As far as calling Donald Trump a racist — shame on you Michelle Obama! Tell us what Obama did!” Terrell challenged the former First Lady. “Donald Trump has given positive reform for Black America, historical Black colleges, low unemployment rate, First Step Act. She will call him a racist and not tout what Obama did because he did nothing for Black people.”

“And just because she is black, that doesn’t give her credibility. She lost credibility today,” Leo declared. Video Below