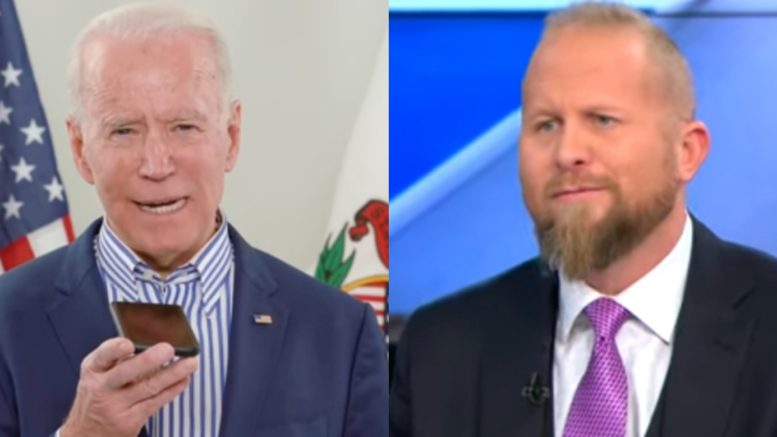 Trump 2020 campaign manager Brad Parscale reacted to a new report that reveals Joe Biden’s plan to hold regular shadow briefings on the coronavirus starting as soon as next week.

According to Politico, Biden will address in his briefings “how he would handle the crisis” and respond to “lies and failures of President Trump.”

On Friday, the former VP reportedly “gave a preview of what’s to come” while speaking to reporters in a conference call from his home in Delaware, where he has been staying since the CDC recommended social distancing.

As per Politico, Biden said in his conference call: “President Trump stop saying false things, will ya?”

“People are worried they are really frightened, when these things don’t come through,” he continued. “He just exacerbates their concern. Stop saying false things you think make you sound like a hero and start putting the full weight of the federal government behind finding fast, safe and effective treatments.”

In response to Biden’s decision to hold shadow briefings, Parscale called the move “dangerous” and suggested the media would “howl” if a Republican presidential candidate went ot the same lengths against a Democrat president. See Below

“So much for national unity,” Parscale tweeted. “If a Republican did this to a Democrat president during a national crisis, the media would howl.”

“It’s also dangerous because Biden will take attention from real updates Americans should know just to score political points,” he concluded. See Below

So much for national unity.

If a Republican did this to a Democrat president during a national crisis, the media would howl.

If he decides to follow through with his shadow briefings, Biden will have a tough time persuading the American public that Trump is doing a poor job, as a new ABC poll shows that over half of Americans approve of the president’s handling of the coronavirus.

According to ABC’s poll, Trump’s support has grown from 43% to 55% approval in just one week with regards to his efforts to combat the virus.

We leave you with video of ABC’s findings: