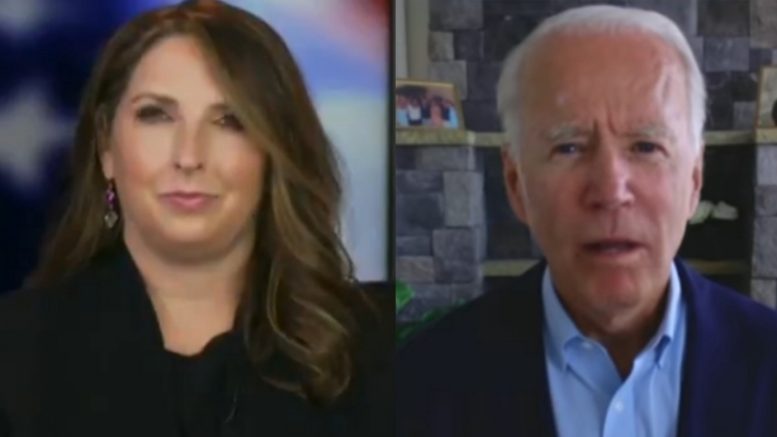 Biden claims the decision to campaign in person is because he really misses having the ability “to grab hands, shake hands,” being the “tactile” politician that he is. The Trump campaign, on the other hand, believes the Biden’s team is switching their strategy because they are “clearly rattled by #HidenBiden criticism” related to the former Vice President campaigning from his basement.

The Trump campaign also cited a recent public poll showing a tie in Minnesota, which traditionally votes Democrat. Trump is poised to flip the state if the momentum continues in his favor.

In response, RNC chairwoman Ronna McDaniel tweeted a video of her interview with Fox News host Harris Faulkner, which she captioned: “If Joe Biden had his way, he would stay in the basement forever. But most Americans are not privileged politicians.”

“That’s why @realDonaldTrump is leading us on a Great American Comeback that balances both our economic reality and the need to be safe and healthy,” she added.

In the video, McDaniel said that she suspects Democrats are seeing that Trump is “taking the lead in a lot of these battleground states, and they’re starting to panic.”

“I think they’ve had a very elitist view of America, saying that you can bunker down in your basement — that’s not tangible for most, realistic to most Americans,” she continued. “Most Americans have to go to the grocery store. Whave to go to work. We can do that in a safe and healthy way.”

“But the Democrats, of course, Joe Biden is a privileged politician. He can stay in his basement forever. Nancy Pelosi can have her fridge stocked by others. Their Hollywood supporters can stay in their mansions forever. That’s not realistic to everyday Americans and Donald Trump has presented a vision of we have to get out there, we have to get this economy going, and we can balance that with being healthy and safe,” McDaniel said.

“And I think Joe Biden’s realizing, ‘I gotta get out on the campaign trail cause I’m gonna lose if I don’t start talking to the American people,'” she concluded. Video Below

If Joe Biden had his way, he would stay in the basement forever.

But most Americans are not privileged politicians.

That’s why @realDonaldTrump is leading us on a Great American Comeback that balances both our economic reality and the need to be safe and healthy. pic.twitter.com/jX5lsm0LQg

Reporter To Psaki: ‘Should There Be an Independent Investigation’ Into Biden’s Alleged Sexual Misconduct?