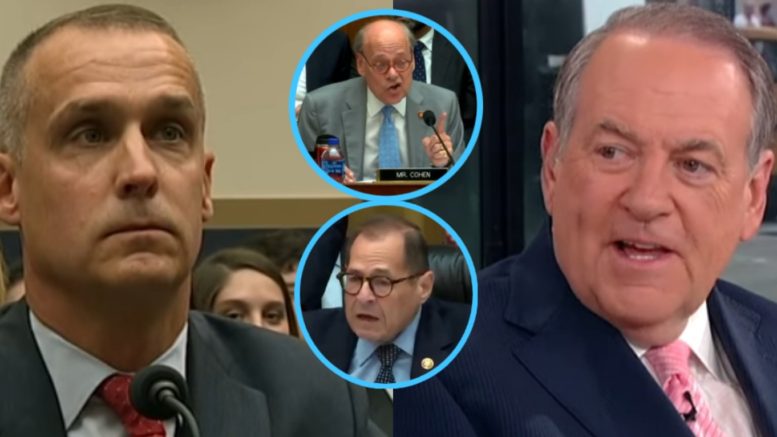 On Wednesday, Mike Huckabee took a moment to weigh in on Cory Lewandowski’s testimony in front of the House Judiciary Committee that took place just one day prior.

Lewandowski’s hearing came as a result of Democrats’ ongoing “investigation” into whether or not President Trump should be impeached, and Cory gave members of the committee a very difficult time acquiring any major new information that could assist their efforts.

As pointed out by the Fox reporter, the hearing likely helped Lewandowski more than Democrats, especially since he is reportedly close to announcing his bid for New Hampshire’s Senate seat. The opporunity to testify essentially gave him free publicity for the race.

Huckabee agreed and said, “I know Cory fairly well. I can assure you he did not wet his pants in that hearing room yesterday. He was enjoying every minute of it.”

Referring to Democrat Congressman Steve Cohen’s suggestion that Lewandowski was a chicken, Huckabee said, “If anybody knows about chicken, it’d be the guy who brought a bucket of chicken to the hearing room one day,” Huckabee said. “But, it was a circus.” Video Below

Huckabee went on to mention how he believes House Speaker Nancy Pelosi wants the “impeachment nonsense” to stop because continuing on with it is virtually “playing into the Republicans’ hands.”

“I wish — well, I don’t wish they would listen to her because I think this whole thing is helping our side as Republicans,” he continued. “But the fact is Nancy Pelosi knows she doesn’t have 218 votes — that’s what it takes to impeach somebody. And even if she got it, it’s gonna die in the Senate and embarrass the entire Democrat caucus.”