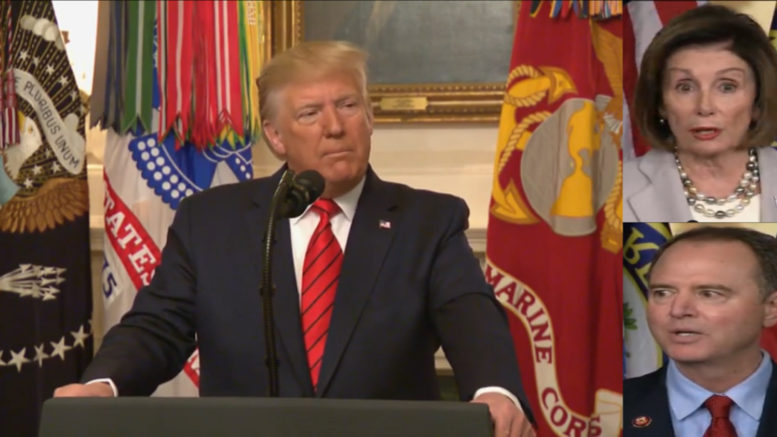 President Donald Trump told reporters, during a press conference on Sunday at the White House, that he did not inform House Speaker Nancy Pelosi (D-CA) or other members of Congress prior to the U.S. special operations forces raid in northwestern Syria, in which ISIS leader Abu Bakr al-Baghdadi died.

The Commander in Chief explained that he wanted to keep the mission kept secret because Washington is a “leaking machine.”

Asked by another reporter about notifying congressional leaders, the President said, “We notified some, others are being notified now as I speak. We were going to notify them last night, but we decided not to do that because ‘Washington leaks like I’ve never seen before’. There’s no country in the world that leaks like we do and ‘Washington is a leaking machine'”.

The Commander in Chief said that he was not going to notify Congress until the military was out because of their safety. “We were able to get it. It was top secret. It was kept. There were no leaks, no nothing. The only people who knew were the few people that I dealt with. … This was a very small group of people that knew about this,” he explained.

“A leak could have cost the death of all them. Now they’re so good, that I think nothing was gonna stop them anything, you want to know the truth. That’s how good they were. We had them surrounded by massive airpower, up in the air, yesterday, at very high levels,” the President added. (Video Below)

Dan Scavino released a photo on Twitter and wrote:

“President Trump is joined by VP Mike Pence, National Security Advisor Robert O’Brien, left; Secretary of Defense Mark Esper and Chairman of the Joint Chiefs of Staff U.S. Army General Mark A. Milley, and Brig. Gen. Marcus Evans, Deputy Director for Special Operations on the Joint Staff, at right, Saturday, Oct. 26, 2019, in the Situation Room of the White House monitoring developments as U.S. Special Operations forces close in on notorious ISIS leader Abu Bakr al-Baghdadi’s compound in Syria with a mission to kill or capture the terrorist.” See Below

Official photo in the Situation Room of the White House monitoring developments: