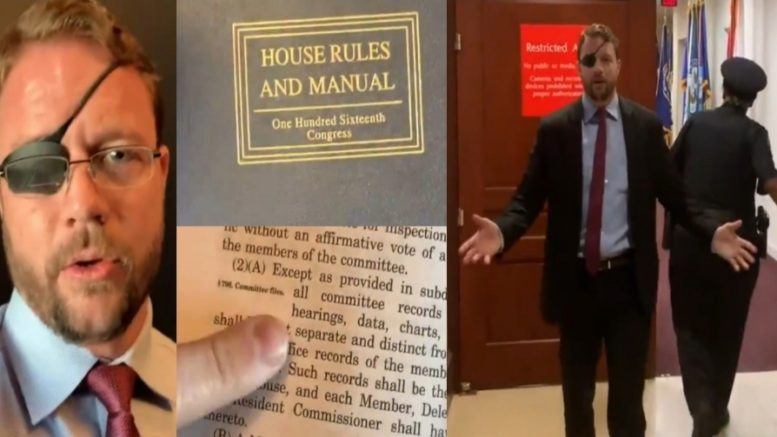 On Wednesday afternoon, Congressman Dan Crenshaw (R-TX) uploaded a video that demonstrates the unfairness of the impeachment inquiry process.

Crenshaw began by mentioning how Chairman Adam Schiff has been saying that non-committee members of Congress can not have access to all hearings and depositions related to the impeachment inquiry.

He then pulled out the House Rules And Manual and turned to a section that states “all committee records (including hearings, data, charts and files) shall be kept seperate and distinct from the congressional office records of the person serving as its chair. Such records shall be the property of the House and each Member, Delegate and the Resident Commissioner shall have access thereto.”

With that paragraph pointed out, Crenshaw said, “Let’s go down and see where they keep these records and see if they give us access, so that we can inform you, the American people, what’s really going on.”

Crenshaw could then be seen walking down into a restricted area on Capitol Hill, where he says many of the classified Congressional documents are kept.

Moments later, he returned with his arms out and saying, “So, they won’t let me see it. Big surprise.” Video Below

“They said non-committee members can’t review any of these transcripts, any of these depositions that have been happening over this last week,” Crenshaw said.

“So, what is they process? Where is the transparency?” Crenshaw asked. “There’s none and that should frustrate all Americans.” Video Below

You’d think the Washington Post would be leading the charge to open this up because, you know, “Democracy Dies in Darkness.” https://t.co/VJwJZC8a76

Related Article: AOC Makes A 5-Point Case For ‘Abolishing’ The Electoral College, Crenshaw Responds: ‘We Live In A Republic’