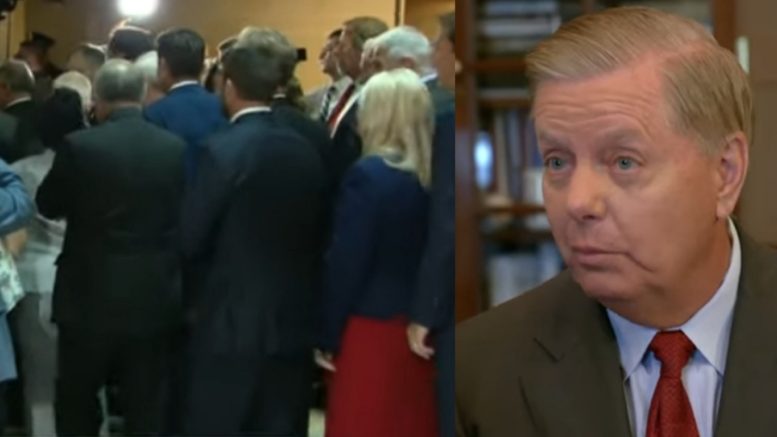 Senator Lindsey Graham gave an initial rebuke after learning House Republicans “stormed” the SCIF where secret hearings are being conducted as part of the Democrat-led “impeachment inquiry.

Dozens of House Republicans entered the SCIF on Tuesday morning right as Laura Cooper, the deputy assistant secretary of Defense for Russia, Ukraine and Eurasia, was set to provide private testimony to protest the secret hearings that have been taking place.

“They’re making a run in the SCIF! That’s not the way to do it! That’s nuts!” Senator Graham initially said to the Associated Press upon learning the news.

But as more facts surfaced, and Senator Graham learned that the protest was “peaceful” in nature, he walked back his initial comments.

Related Article: Sen Graham Gives Dems An Ultimatum If Schiff Fails To Release Volker’s Testimony: ‘If This Continues, I Will Call Volker To Testify’

Senator Graham tweeted an article by The Hill who covered his first reaction to Republicans’ SCIF protest and provided a “correction” to it. See Below

“CORRECTION: I was initially told House GOP took the SCIF by force – basically like a GOP version of Occupy Wall Street,” Graham said in his tweet.”

“Apparently it was a peaceful protest. Big difference,” he added.

“I understand their frustration and they have good reason to be upset,” Graham concluded. See Below

In ending, here is video of Republicans entering the SCIF, which appears to be peaceful afterall: