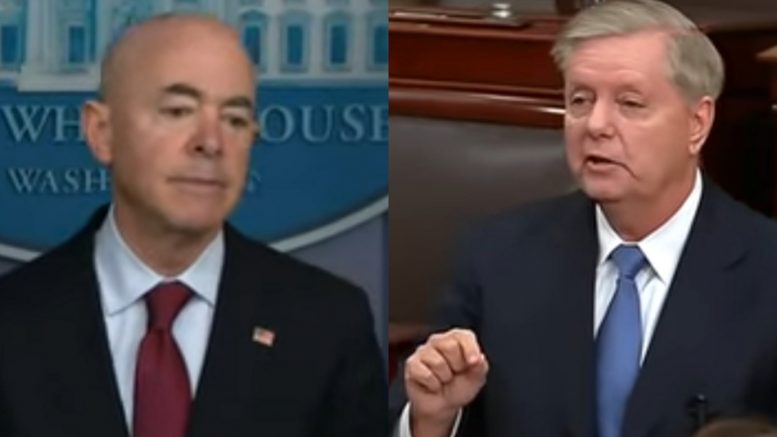 During a Monday press briefing at the White House, Homeland Security Secretary Alejandro Mayorkas rejected claims that there is a crisis at the U.S. southern border, and he urged migrants “wait” to come to America until the “gutted” immigration system is rebuilt.

According to Politico, “There’s already an uptick in migrants heading to the border and some have crossed and been released in some communities already grappling with the pandemic, a strained health care system and high unemployment.”

The Wall Street Journal also reported that there is a surge of unaccompanied immigrant children crossing the U.S. southern border illegally, which is on pace to rise more than 50% in February.

According to Fox News, “When Asked during a press briefing at the White House about whether there is a “crisis” at the border, amid a surge of unaccompanied child migrants, Mayorkas said ‘no.'”

“The men and women of the Department of Homeland Security are working around the clock seven days a week to ensure that we do not have a crisis at the border—that we manage the challenge, as acute as the challenge is,” Mayorkas is quoted as telling journalists on Monday.

Related Article: Democrat Rep. Drops A Warning Over Biden’s Border Policies: ‘Catastrophic For Our Party, For Our Country’

In response, Senator Lindsey Graham tweeted, “With all due respect to Secretary Mayorkas, you’re missing a lot. I just got back from the border. People are very worried about losing control of the border because of the Biden Administration’s decision to cancel the ‘Remain in Mexico’ policy regarding asylum.”

“Word is out all over Central America that the old way of doing business is now back in place. Very much a crisis at our border,” he declared.

Word is out all over Central America that the old way of doing business is now back in place.

Very much a crisis at our border.
https://t.co/QPN8oPkRKb

In recent days, Democrat Congressman Vicente Gonzalez (D-TX) has voiced concern about Joe Biden’s softer immigration policies after just over a month of being in office.

“The way we’re doing it right now is catastrophic and is a recipe for disaster in the middle of a pandemic,” Rep. Gonzalez told Politico.

Here is video of Gonzalez pointing out some of the “wrong paths” the Biden administration is heading down in regards to immigration, in his opinion: