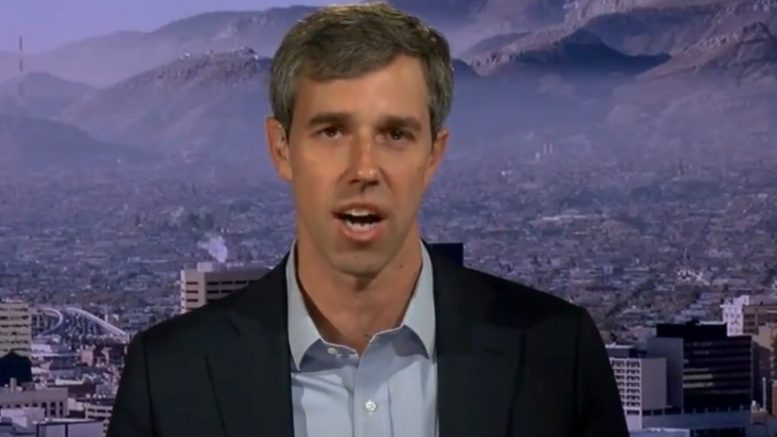 Democrat Presidential candidate Beto O’Rourke is calling on all Texans to help him send a message to President Trump on Thursday during the scheduled Keep America Great rally in Dallas, Texas.

Beto is holding a counter rally called “The Rally Against Fear” in Grand Prairie, Texas, which is just west of Dallas, and it will start one hour before President Trump’s rally is scheduled to begin.

Appearing on ABC to discuss his counter rally, Beto said, “This is just a great chance for Texans to come out this Thursday at 6 PM at the theater in Grand Prairie to stand up for this country, and to stand up against fear and hatred and racism and intolerance.”

“This is all about people of good conscience, be they Republicans, Democrats, Independents, supporters of mine or supporters of some other candidate or still undecided,” he added.

Beto said those who will attend his rally “know that they want to stand up for this country at this defining moment of truth.”

He went on to claim that presently there is “intimidation against immigrants and the LGBTQ community,” and “hate crimes” are on the rise “every single year for the last three years.” So his rally will give Texans a chance to “stand up for all of us,” according to Beto. Video Below

Beto recently faced backlash after promoting his idea of pulling tax exempt status from religious institutions if they do not agree with same-sex marriage under his presidency.

We leave you with Franklin Graham’s response to Beto’s idea.