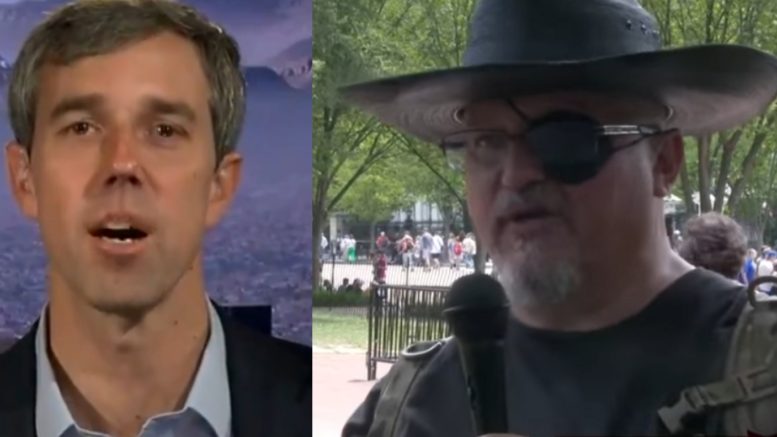 The Oath Keepers, which is a “loosely organized militia made up of military veterans and retired police officers,” are ready to defend Trump supporters from leftist protesters at President Trump’s Keep America Great rally that is scheduled for this Thursday.

Their move comes in wake of protests that turned violent at Trump’s Minnesota rally and as Democrat Presidential candidate Beto O’Rourke is planning a “counter rally” to protest the President visiting Dallas, which is also likely to stir up leftists in the area.

“We’re running escorts to and from the rally. Our biggest focus is when [rally attendees] leave at night. That’s when they’re most in danger of being attacked,” Stewart Rhodes, who is one of the Oath Keepers’ leaders, told The Dallas Morning News

The Oath Keepers also tweeted a response to Beto O’Rourke, who is calling on Texans from all parties to help him send a message to President Trump on Thursday at a theater in Grand Prairie during the scheduled Keep America Great rally in Dallas.

While promoting his counter rally on Twitter, Beto said, “Trump is holding a rally in Dallas—and it’s on us to declare his hatred, racism, and division does not belong in Texas. That’s why we’re organizing the Rally Against Fear. If you are ready to stand against Trump, and for our country, join us next Thursday.”

Upon seeing Beto’s tweet, Oath Keepers responded and let “Beta” and leftist protesters know that the Oath Keepers will be in the area to maintain order and help ensure Trump supporters are kept safe at the Dallas rally. See Below

“See you in Dallas ‘Beta,'” the Oath Keepers said. “You’re the King of projection – YOU capitalize on fear for political gain, and stir up hatred against millions of Texans you falsely libel as “racist” and then incite violence against them.”

‘We’ll be there to defend Trump supporters,” they declared.

Although the tweet suggested Oath Keepers could be at Beto’s event, Rhodes told The Dallas Morning News that his organization will focus solely on the Trump event. See Below