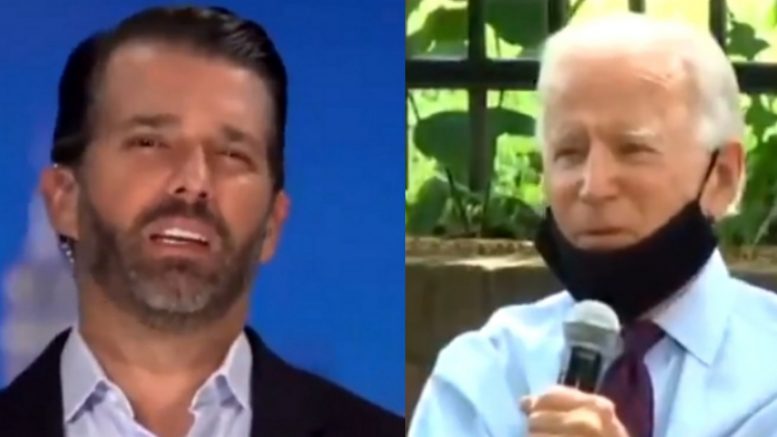 Former Vice President Joe Biden will not “actually be the guy in charge” if he wins the November election and and if that is the case, it will be an extremely “scary” situation, according to Donald Trump Jr.

Trump Jr. made the bold assessment while weighing in on the dangers of a Biden presidency in wake of extreme platform proposals made by a unity task force that was formed by Joe Biden and Bernie Sanders.

“Believe someone when they tell you who they are. That is what the far left has become. There is no rationale anymore,” Don Jr. told Sean Hannity on Wednesday.

“It’s clearly gone way beyond racism at this point because — I don’t see [Abraham Lincoln] and [Ulysses S. Grant] as members of the Confederacy, unless I slept through that part of American history growing up,” he added.

“And let’s not kid ourselves…no one believes that Joe Biden is gonna ever actually be the guy in charge if he pulls this thing out,” he concluded. Video Below

No one actually believes @JoeBiden Will be in charge if he pulls this thing off. @DonaldJTrumpJr pic.twitter.com/LtUwCJyV2m

Trump Jr. went on to explain why a Biden presidency should scare every American.

.@DonaldJTrumpJr says @JoeBiden been president should scare everyone. pic.twitter.com/G05PDduDfQ

Here’s a clip of him discussing Biden flip-flopping on prior policies he once supported:

.@DonaldJTrumpJr says liberal privilege is one privilege they refuse to discuss. @JoeBiden Can flip flop over his 50 years of failed policies and they never say a word. pic.twitter.com/f8z2ufJu6s

In ending, here is a tweet from earlier on Wednesday, where Trump Jr. dropped a warning on the prospects of a Biden presidency:

If Joe Biden gets elected your taxes are going up and everything from the economy to police funding to Mount Rushmore are coming down!