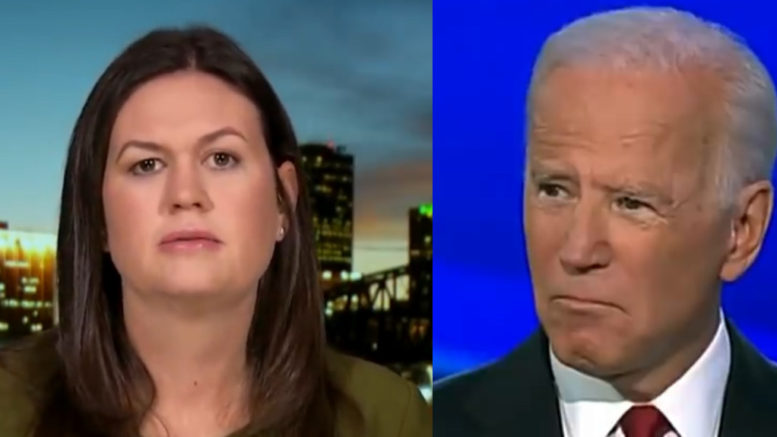 Former White House press secretary, Sarah Huckabee Sanders, spoke with “Fox & Friends” Wednesday where she weighed in on the Democrat’s Tuesday debate and said the President was the big winner and former vice president Joe Biden was the “big loser”.

The debate came after an interview that aired Tuesday on ABC’s “Good Morning America” with Biden’s son, Hunter, in which he broke his silence since his overseas business dealings came under the radar. Hunter insisted that he did nothing improper while he served on the board of a Ukrainian gas company, but admitted accepting the lucrative position was “poor judgment” on his part.

“I think the big loser last night was Joe Biden,” Sanders expressed. “Once again, I think it was incredibly telling that all of the fire that was taken on stage was by Elizabeth Warren and not Joe Biden, indicating that even Democrats on that stage know that Biden is finished and Warren is the new front runner.”

Sanders said now that Warren is the frontrunner among the Democratic candidates, it’s “even more good news for President Trump”, because Warren is the new face of the Democrat party, adding “that is a great contrast for this President, and I think it sets him up very nicely for reelection in November.”

Brian Kilmeade pointed out that Biden doesn’t sit down for one on one interviews as President Trump does, and he doesn’t go to any spin rooms to talk to reporters after debates. “He’s no longer the favorite, he’s no longer leading in most polls. What do you think is really going on behind the scenes?” he asked.

“I think it’s a recognition of the failures of him as vice president for 8 years. I think it is showing that they didn’t get anything done– the things they did, the American people don’t want. And I think it shows the level of corruption that people think that the Biden family is actually engaged in,” Sanders said. (Continued Below)

The former press secretary said that the questioning during Tuesday night’s debate was “weak and pathetic” adding that she is not surprised that CNN, who hosted the debate, “accused President Trump in their questions, yet gave Biden a completely free pass.”

“They gave him one question, a very basic followup and moved on. I couldn’t believe that they glossed over the corruption that we’ve seen exposed over the last several weeks, so quickly as they did last night,” Sanders explained. “Nobody else on stage even thought to call Biden out.”

“I think one, it’s because they know he and his family have been so deeply involved in that corruption, but more so, because they know he is no longer a factor in this race,” she clarified. “I think they’ve already decided to write him off, and they’re focusing their fire on Elizabeth Warren. (Continued Below)

Sanders responded to a clip of Biden’s statement during Tuesday’s debate on the one question pertaining to his son. Biden claimed he did nothing wrong, then quickly tried to dodge the question and attacked the President instead by saying, “I will beat [Trump] like a drum.”

“It’s as laughable now as it was every other time that he said it,” Sanders said reffering to Biden’s statement. “I thought it was interesting that vice president Biden chose to say that his son’s statement speaks for itself, particularly, that it contradicted his own statement. I think the reason he didn’t want to talk about it, he didn’t want to defend it, is because they were totally different. Who’s lying? Was it his son or was it the vice president?”