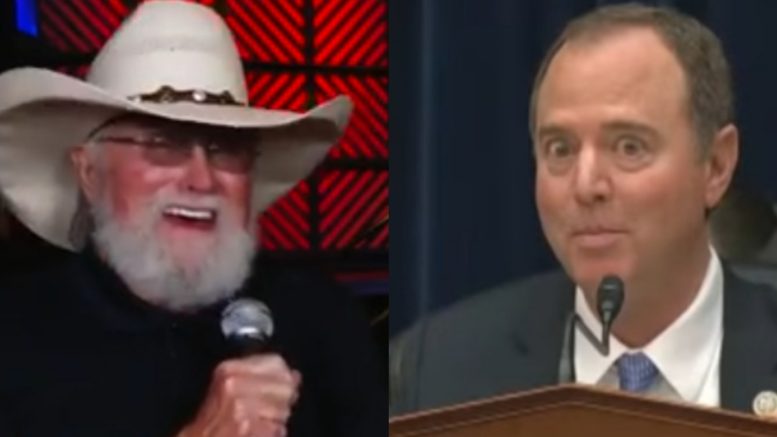 House Intel Committee Chairman Adam Schiff drew controversy after “making up” excerpts of President Trump’s phone call with Ukraine President Zelensky while delivering his opening statement at Thursday’s hearing in regards to a complaint by an alleged “whistleblower.”

Schiff literally put words in the mouth of President Trump while describing what happened during the phone call in question, making the situation seem much worse than what the actual transcript of the conversation suggests.

Republicans accused Schiff of “making up” facts because they say he doesn’t have evidence to prove President Trump did anything wrong. While Schiff labeled his hearing shenanigans as a “parody,” and stood by his initial statement that the phone call was “damning.”

Conservative singer and song-writer Charlie Daniels weighed in on what he thinks of Schiff in wake of the media frenzy surrounding the whistleblower story, on top of Schiff’s peculiar moment where he manufactured excerpts to paint a negative picture of President Trump.

“Adam Schiff you are so full of the stuff I dig out of my bull pens that if somebody throws one more cow patty at you , you will tip over backwards,” Charlie said.

“A human being cannot harbor as much hate as you carry in your heart without it destroying them eventually,” he declared. Video Below

Related Article: Charlie Daniels Blasts Out A Stern Message To Those Who Condemn America: ‘Planes Leave Every Day’

Charlie Daniels’ thoughts echo those of President Trump and GOP leaders who have been slamming Schiff and asking for the Democrat party to hold him accountable for his actions.

President Trump has even called on Schiff to resign, while Congressman Andy Biggs introduced a motion to censure Schiff over his hearing stunt.

In ending here’s video of Rep. Biggs giving his rationale for why he introduced a motion to censure Adam Schiff: