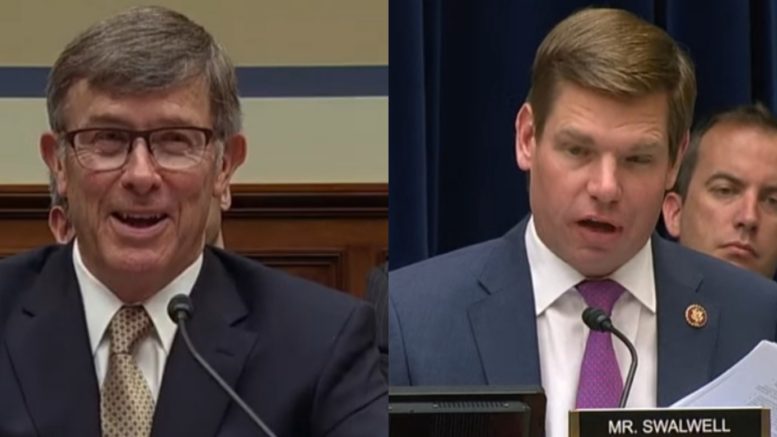 Maguire referred to Swalwell as “Congresswoman” in the first minute of being grilled by the representative from California, and quickly apologized when he became aware of his slip-up.

Swalwell was in the process of trying to figure out if a “cover-up” occurred in the aftermath of a phone call between President Trump and Ukraine’s President Zelensky, as suggested by an alleged “whistleblower.”

Related Article: Lewandowski Paints A Depiction Of Who The ‘Whistleblower’ Is: ‘This Is Like Spaceballs The Movie’

“The whistleblower alleges that immediately after the President’s call with the President of Ukraine on July 25, White House lawyers moved quickly to direct White House officials to move electronic transcripts from one computer system where it was normally stored to a secret classified information system. Is that right?” Swalwell asked.

“Congresswoman,” Maguire replied. “Excuse me, sir, I apologize.” Video Below

Swalwell then asked for a simple “yes’ or “no” response, which Maguire followed up by saying, “Sir, all I know is that was the allegation.”

Upon witnessing Swalwell being called “Congresswoman,” conservative actor Dean Cain posted a video of the incident on Twitter.

He appropriately captioned it, “Eric Swalwell was just misgendered.” Video Below

In ending, here is a full clip of Swalwell questioning Acting DNI Maguire.