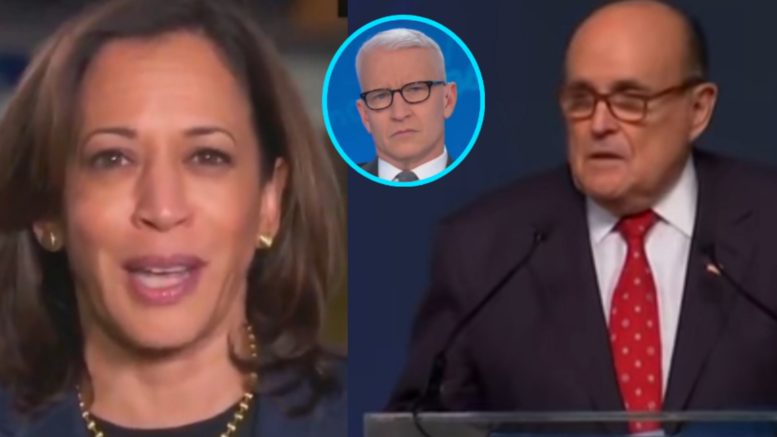 Democrat Senator and Presidential candidate Kamala Harris is positive President Trump’s attorney Rudy Giuliani has “broken many laws” with his personal inquiry in Ukraine, but she had a difficult time naming such laws he broke when pressed further by CNN’s Anderson Cooper.

While appearing on AC360, Kamala gave her reaction to a report that suggests Giuliani pressed the State Department and White House to grant a visa to a former Ukranian official who claims to have had dirt on Democrats.

“It’s further evidence of corruption by this administration and the personal Attorney of the President of the United States, clearly implicitly being given permission to act as though he is an arm of the government and the State Department,” Kamala said.

She also claimed Rudy’s actions are “a violation of an extraordinary amount of rules and ethical laws,” and she said, “He has clearly broken many laws.”

Just seconds later in her interview, Kamala appeared taken by surprise when Anderson Cooper pressed her on what laws Rudy may have broken. Video Below

Cooper asked, “Are there specific laws you believe Giuliani has broken or may have broken?”

Kamala, who seemed as if she was put on the spot and not prepared, replied: “Well, I don’t know.”

“We’re gonna find out,” she continued without being able to name a specific law Rudy broke. “But I think the range includes not only abuse of power and perhaps misstatement and mischaracterization of his role and responsibilities. But I also really do wonder, just instinctively, whether there has been any bribery associated with Giuliani’s conduct. I think there are a number of questions that need asked.” Video Below

Kamala Harris claims that Rudy Giuliani has "broken many laws"

CNN's Anderson Cooper asks her what laws he has broken

Harris responds: "Well, I, I, I don't know" pic.twitter.com/N2dUg7b2av

Judge Jeanine Slams Kamala Harris: “What’s with the Stupid Giggle? Are You Laughing at Us?”