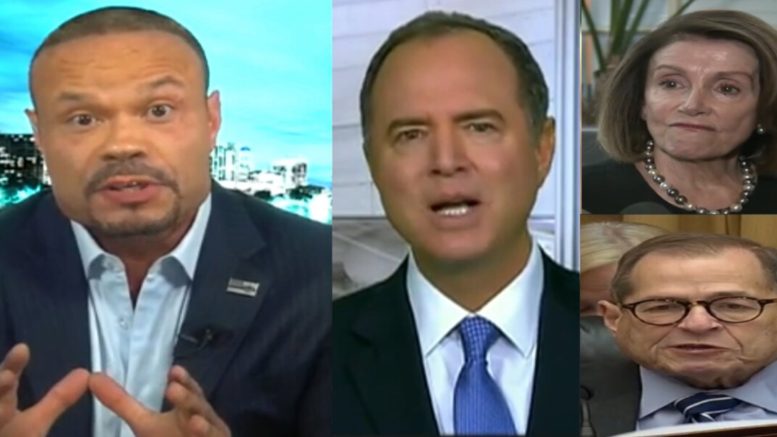 Bongino suggested that Democrats are starting to panic at the possibility of being linked to illegal spying as the Department of Justice watchdog is preparing to release his report on FISA abuse, along with John Durham investigating the origins of the Trump/Russia probe.

“It’s never going to stop. I mean, the republic is dying a slow death. We’re on life support here and you can thank the Democrats and their sycophantic media-bootlickers for this,” Bongino said. “What’s going on right now?”

Bongino said that the Democrats are panicking for two reasons: “They’re panicking because the IG report’s about to come out, which is about to expose a massive government spying operation against Donald Trump. Listen, here’s the key takeaway– ‘in collusion with foreign governments’. That’s why they’re panicking.”

“And they’re panicking because what the Obama administration did is a thousand times worse than what they’re alleging Donald Trump did,” he continued.

Bongino pointed out that it’s President Trump’s job to protect the office of the president by standing firm against congressional lawmakers, specifically Rep. Adam Schiff (D-CA), by upholding his privilege as Commander in Chief. (Continued Below)

“The first job of the President right now is to protect the presidency,” Bongino said. “The White House counsel and others have to draw the line. This is one of the sleaziest members of Congress, Adam Schiff. He went in front of the American people in a public hearing where people could look at a public transcript and literally lied about it, and then tried to cover his tracks and said, ‘Oh, it’s just parody.'”

“Listen, this isn’t ‘Saturday Night Live’, it’s not ‘Leave it to Beaver’. This is a nationally televised, important hearing and he lied. He’s a liar, this guy,” Bongino added. “Don’t disclose anything to this guy. … He made up a phony dialogue, and before the dialogue, he lied about the contents of the call for days. ‘There was a quid pro quo, there was a favor about this Ukranian military.’ That is not what the transcript said. He just made it up.”

In mid-September, Department of Justice (DOJ) Inspector General Michael Horowitz notified Attorney General William Barr of the completion of his investigation into possible abuses of the Foreign Intelligence Surveillance of Act (FISA) by DOJ officials during the 2016 presidential election. After the DOJ has a chance to review and comment on the report, it will be sent to the Judiciary Committee and made public, according to a letter sent to lawmakers. (Video Below)

(Related: Charlie Daniels Slams Schiff Amid Whistleblower Drama: ‘You Are So Full Of The Stuff I Dig Out Of My Bull Pens’)