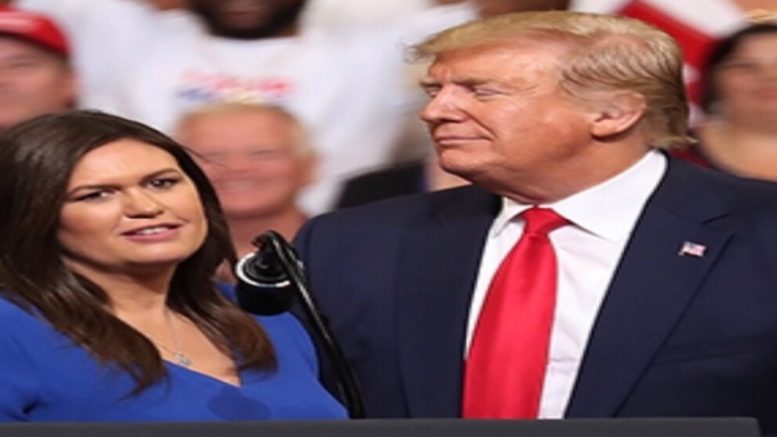 Former White House Press Secretary, Sarah Huckabee Sanders, took to Twitter on Monday where she announced that she “launched a new website.”

Sanders’ new site features a logo her initials and has a “Stay In Touch” section that asks fans to enter their email. There is also a section to “Connect with Sarah” to send her a note or “request Sarah to speak at an event.”

On her website, Sarah Sanders’ “About” section reads in part, “Sarah Huckabee Sanders served as White House Press Secretary for President Donald J. Trump from 2017 to 2019. A trusted confidante of the President, Sarah advised him on everything from press and communications strategy to personnel and policy.”

“For two and a half years, Sarah was at the President’s side, battling with the media, working with lawmakers and CEOs, and staffing the President on every foreign trip, including dozens of meetings with foreign leaders,” the website says.

Sarah is only the third woman – and the very first mom – to ever hold the job of White House Press Secretary.

Sanders resigned from the White House in June, and President Trump announced the news by suggesting that she may run for Arkansas governor. “After 3 1/2 years, our wonderful Sarah Huckabee Sanders will be leaving the White House at the end of the month and going home to the Great State of Arkansas,” Trump said. “She is a very special person with extraordinary talents, who has done an incredible job! I hope she decides to run for Governor of Arkansas – she would be fantastic. Sarah, thank you for a job well done!” (Continued Below)

Sanders recently accepted a job at Fox News as a contributor where she announced last week that she will be starting September 6th.

Sanders included a press release from Fox News confirming her position as a contributor at Fox News on Twitter Thursday.

Sanders will provide political commentary and analysis across all of FOX News Media, including FOX News Channel (FNC), FOX Business Network (FBN), FOX News Digital, FOX Nation and the radio/podcast division. She will make her debut on FOX & Friends during its next live audience show on September 6th, according to the press release. (Continued Below)

Could she be gearing up to position herself as an elected official?

Watch: Trump Supporters Gather Outside of Mar-a-Lago After FBI Raid