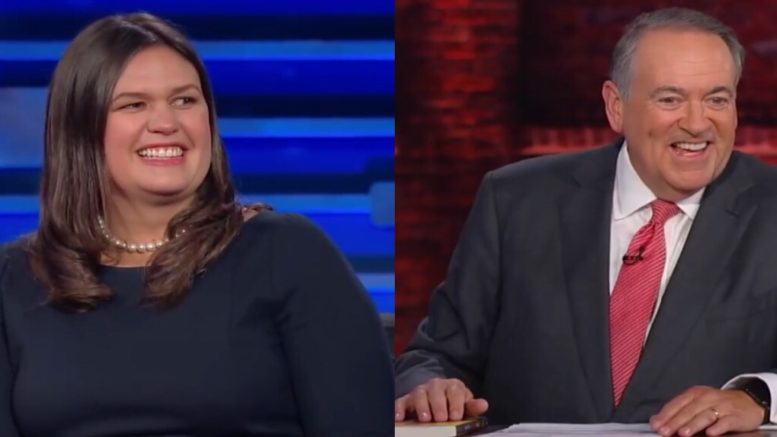 Former White Press Secretary, Sarah Huckabee Sanders, took to Twitter on Thursday where she announced that she has a new job starting next month.

Sanders will join Fox News as a contributor and her first gig will be September 6th.

Sarah Sanders wrote on Twitter Thursday, “Excited to join @FoxNews as a contributor, looking forward to being with the @foxandfriends team for my first hit on September 6th.

Sanders included a press release from Fox News confirming her position as a contributor at Fox News.

Sanders will provide political commentary and analysis across all of FOX News Media, including FOX News Channel (FNC), FOX Business Network (FBN), FOX News Digital, FOX Nation and the radio/podcast division. She will make her debut on FOX & Friends during its next live audience show on September 6th, according to the press release.

In commenting on the announcement, Sanders said, “FOX News has been the number one news organization in the country for 17 years running and I am beyond proud to join their incredible stable of on-air contributors in providing political insights and analysis.” (Continued Below)

According to the Fox News press release:

From July 2017 through June 2019, Sanders served as the White House Press Secretary for President Donald Trump. As the third woman and first mom to ever hold the position, Sanders was the administration’s chief spokesperson. She joined the administration as Deputy Press Secretary in January 2017 after previously working as a senior advisor for the president’s election campaign.

The daughter of former Arkansas Governor Mike Huckabee (R), Sanders has previously worked in leadership roles for U.S. Senators, Governors, and presidential campaigns. In Arkansas, Sarah was a senior advisor to Senator Tom Cotton (R) in 2014 when he defeated incumbent Democratic Senator Mark Pryor, and was campaign manager for Senator John Boozman (R) in 2010 when he defeated incumbent Democratic Senator Blanche Lincoln. In 2007 and 2008, Sanders helped lead Gov. Huckabee to victory in the Iowa Caucuses and seven other states as his National Political Director. (Continued Below)

Outside of politics, Sanders has advised major Fortune 500 companies and nonprofits, including serving as manager of the ONE Campaign, a global nonprofit founded by U2’s Bono to take action to end extreme poverty and preventable disease.

An accomplished political consultant, Sanders was named one of TIME Magazine’s “40 under 40.” She holds a Bachelor of Arts degree in political science from Ouachita Baptist University in Arkadelphia, Arkansas and lives with her husband and three young children in Little Rock, Arkansas.

Sarah’s father, former Arkansas Governor, Mike Huckabee, responded on Twitter Thursday and wrote, “Today, @FoxNews revealed just how smart they are! Another Huckabee joins the “A” team! Welcome aboard, baby girl! If you had signed w/ CNN, you’d been voted off the island!

Excited to join @FoxNews as a contributor, looking forward to being with the @foxandfriends team for my first hit on September 6th. https://t.co/Jb2HCFc1aM

Today, @FoxNews revealed just how smart they are! Another Huckabee joins the "A" team! Welcome aboard, baby girl! If you had signed w/ CNN, you'd been voted off the island! https://t.co/kG3TWS2vVh

(Related: Sarah Sanders Exposes Three Dem ‘Lies’ That Almost Make Her ‘Feel Sorry’ For Them: ‘Maybe They Should Stop Lying’)

Mark Levin On Rush Limbaugh: “He Was One Of My Best Friends… He Will Be Grievously Missed”