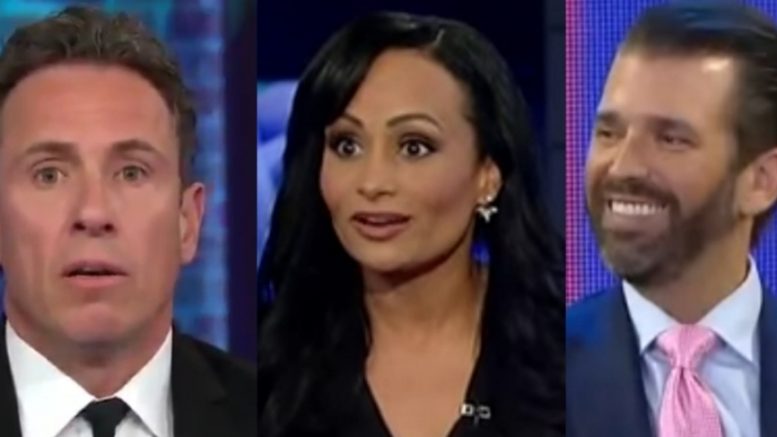 At an event in New York, Chris Cuomo went off after a man called him “Fredo.”

In viral footage caught on a cell phone, Cuomo can be seen confronting and threatening the other man.

The man says, “I thought that’s who you were,” while Cuomo replies, “No, punk ass b**ches from the right call me ‘Fredo.’ My name is Chris Cuomo. I’m an anchor on CNN. ‘Fredo’ is from The Godfather. He was the weak brother.”

Cuomo claimed that the word is an “insult” to the Italian people and “it’s like the N word for us.”

Cuomo then threatened the other man saying, “I’ll f***in ruin your shit. I’ll f***ing throw you down these stairs.” Video Below

Cuomo Goes Off After Being Called ‘Fredo’

Cuomo: "You're going to have a problem"

Man: "What are you going to do about it?"

Cuomo: "I'll fuckin ruin your shit. I'll fucking throw you down these stairs"

Upon seeing the footage, Katrina Pierson and Don Jr. shut down Cuomo’s notion that Fredo is comparable to the N word.

Katrina said, “Did @ChrisCuomo just say that “Fredo” is to Italians what the N word is to black people? Th N word is a dehumanizing word used against blacks who endured years of oppression. Fredo is a term from The Godfather, referring to the dumb brother. Equivocating the two is pure racism.”

Don Jr. then chimed in when he said, “Hey @ChrisCuomo, take it from me, “Fredo” isn’t the N word for Italians, it just means you’re the dumb brother.”

Hey @ChrisCuomo, take it from me, “Fredo” isn’t the N word for Italians, it just means you’re the dumb brother. 😉 https://t.co/sgg6yF7UDO

In a later tweet, Don Jr.’s posted a clip where a member of CNN’s panel called him “Fredo” on the air while on Cuomo’s show. We leave you with Don Jr.’s response to that segment.

Does CNN’s head of PR still think “Fredo” is an ethnic slur after watching this? Because if it’s the N word for Italians like @ChrisCuomo says, I don’t understand why Chris seems so at ease with someone saying it here. An excuse just as fake as his news. #FredoCuomo https://t.co/8G8yuY80CK pic.twitter.com/1gwVyDVCob

Donald Trump Jr. Trolls Whoopi Goldberg With A Snarky Belated-Birthday Wish: “Perhaps Have Someone On The Show Who Doesn’t Hate America?”