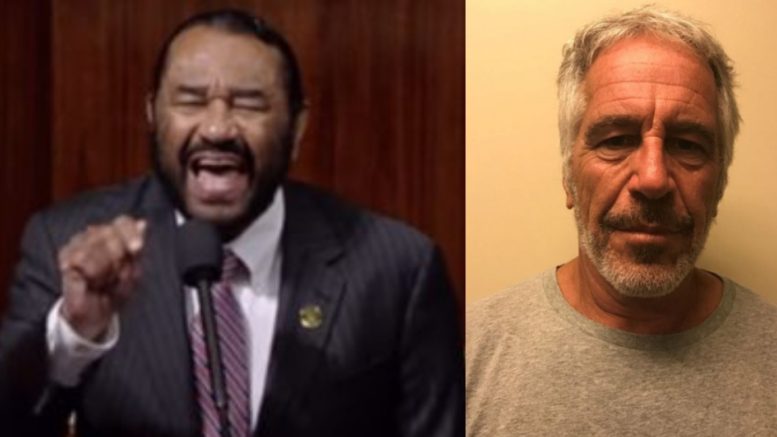 Congressman Al Green (D-TX) called for a Congressional investigation Saturday afternoon after hearing that Jeffrey Epstein reportedly committed suicide in the New York jail he was being held as he awaited trial.

Epstein’s death opened the door to a wide range of conspiracy theories as the general public found it hard to believe that the billionaire could have committed such an act while on suicide watch.

Suspicions have only intensified since Saturday as more details come to light, including that the prison’s cameras malfunctioned among other things.

Green had been on a kick to impeach the President in recent weeks, but he shifted gears over the weekend in an effort to help end speculation.

“Because the public has a right to know, I’m calling for a congressional investigation,” he declared. See Below

The suicide of Mr. Epstein is an impossibilty. When an impossiblty occurs involving powerful people and possible criminality there must be an investigation to end speculation. Because the public has a right to know, I’m calling for a congressional investigation. #JefferyEpstein

The FBI and Inspector General already announced their plan to investigate Epstein’s death.

However, an immediate House investigation would likely only be possible if oversight committee chairmen, such as Jerry Nadler, would re-prioritize investigative efforts. Especially since Nadler is on a mission to open an impeachment inquiry on President Trump and obtain records on Brett Kavanaugh.

If more representatives join Al Green’s call for a Congressional investigation, it could leave House committees with no other choice but to do so.

In ending, here is Rep. Gaetz response to Alexandria Ocasio-Cortez after she demanded answers.

Chairman @RepJerryNadler should prioritize a Judiciary investigation into how Jeffrey Epstein died in federal custody (in Nadler’s own neighborhood!) over the Kavanaugh confirmation (which already happened), and the Russia hoax (which never happened).