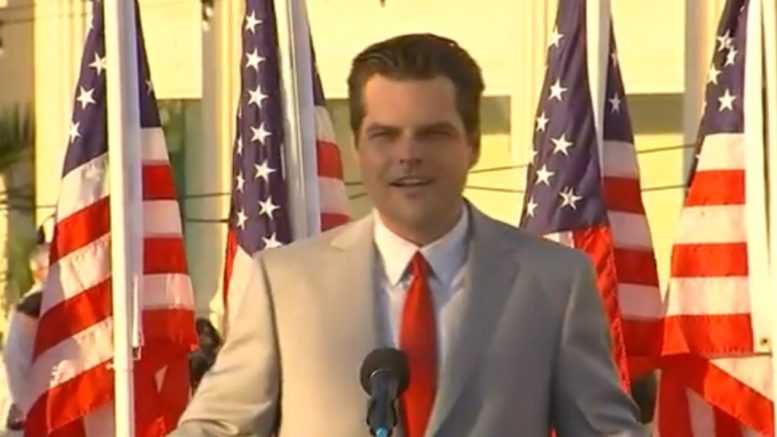 During during an event in Miami on Friday, Rep. Matt Gaetz (R-FL) insisted he is “not going anywhere” after the House Ethics Committee announced its members are investigating allegations reportedly involving the Florida congressman.

The committee, chaired by Democratic Rep. Ted Deutch (D-FL), cautioned that its announcement of an investigation “does not itself indicate that any violation has occurred, or reflect any judgment on behalf of the Committee.”

“The Committee is aware of public allegations that Representative Matt Gaetz may have engaged in sexual misconduct and/or illicit drug use, shared inappropriate images or videos on the House floor, misused state identification records, converted campaign funds to personal use, and/or accepted a bribe, improper gratuity, or impermissible gift, in violation of House Rules, laws, or other standards of conduct,” the panel said in a statement announcing it is beginning an investigation to gather additional information.

Rep. Matt Gaetz has not been charged with any crimes at this point, but has hired two top defense attorneys as the investigation continues, reported The Hill.

“I have not yet begun to fight for the country I love and for the nation I know benefits from America first principles,” the Florida congressman told supporters during the “Save America Summit” fundraiser held by the Women for America First political action committee.

“I’m built for the battle, and I’m not going anywhere,” Mr. Gaetz insisted. “The smears against me range from distortions from my personal life to wild, and I mean wild, conspiracy theories. I won’t be intimidated by a lying media, and I won’t be extorted by a former DOJ officials and the crooks he is working with. The truth will prevail!” Continued Below

“Firebrands don’t retreat,” he said. “Especially when the battle for the soul of our country calls. Big government, big tech, big business, big media — they’d all breathe a sigh of relief if I were no longer in the Congress fighting for you.”

“I am the only Republican in Congress who doesn’t take any money from federal lobbyists or political action committees. Their money is no good with me, and that scares them. And you know what? It should,” Rep. Gaetz expressed.

“They lie about me because I tell the truth about them, and I’m not gonna stop,” he warned. “So when you see the leaks and the lies and the false hoods and the smears– when you see the anonymous sources and insiders forecasting my demise, know this: they aren’t really coming for me, they’re coming for you. I’m just in the way.” Video Below

"I won't be intimidated by a lying media & I won't be extorted by a former DOJ official & the crooks he is working with. The truth will prevail!" pic.twitter.com/pE28hkiqUE

Big government, big tech, and big media would all breathe a sigh of relief if I were no longer in the Congress fighting for you.

Know this – they aren’t really coming for me, they’re coming for you.

I’m just in the way. pic.twitter.com/cZBfEy6Q14

(Related: Rep. Gaetz Drops The Name Of The Person He Believes Is Behind An Alleged ‘Extortion’ Scheme Against Him)