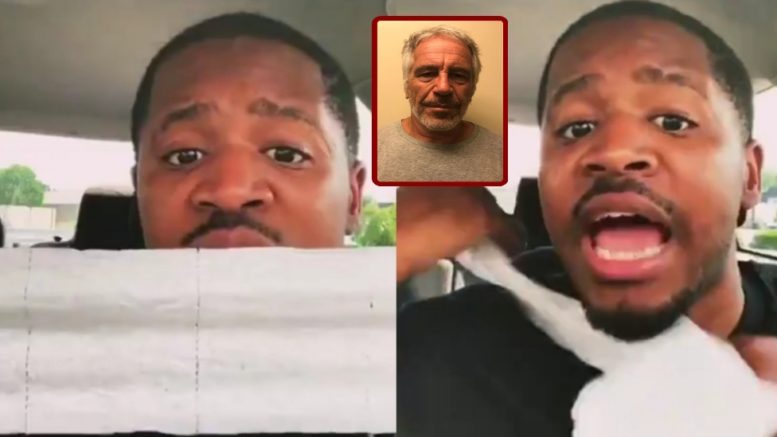 As more details surrounding the death of billionaire Jeffrey Epstein come to light, Terrence Williams doesn’t think any of it is adding up right.

Terrence, along with many others including a former inmate, can not fathom how suicide by hanging while on suicide watch was even possible given the facts that have been presented thus far.

In a video posted on social media, Terrence demonstrated with the only likely material in Epstein’s holding cell (tissue paper) and poked holes in the suicide narrative.

Holding up toilet paper, Terrence said, “When you are on suicide watch, all they give you is tissue. You can not hang yourself with tissue. I don’t know who told you that, but you can’t do it.” He showed viewers what he was talking about, as the toilet paper broke when trying to put it over his neck.

Terrence went on to say, “Now this is really suspicious. They said that — now they are saying that he was released from suicide watch on a Saturday.”

“On a Saturday?” he reacted. “The psychiatrist doesn’t even really work on Saturdays. And what psychiatrist is coming in to release a prisoner from suicide watch on a Saturday, huh?” Video Below

And then the “real kicker,” according to Terrence, is that the cameras reportedly were not working at the time.

He then summed it all up and ended by saying, “Conspiracy theory? No! I’m just another black man putting some things together in this country, that’s all.” Video Below

When on SUICIDE WATCH you are left alone with TISSUE

You can’t hang your self with TISSUE

Reports say he was released from SuicideWatch on SATURDAY

So the Psychiatrist came in on the wknd to release him?

Terrence Williams Blasts Joy Behar As Photo Re-Surfaces From Her Past: ‘Joy Blackface!’